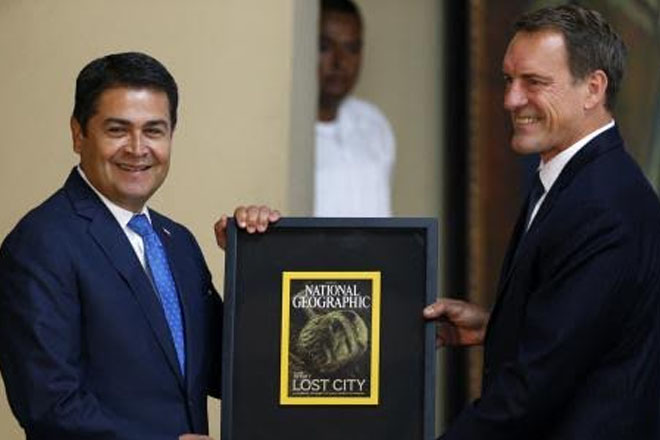 ‘Lost City of the Monkey God’ uncovered in Honduras

Tegucigalpa, Honduras — President of Honduras Juan Orlando Hernandez joined National Geographic at an October 6th event at the Presidential Palace to highlight the amazing discoveries detailed in the organization’s reporting on Ciudad Blanca. “The Lost City of the Monkey God” is believed to have belonged to a lost civilization and has been hidden in the Honduran jungle for more than 600 years.

Hernandez announced during the event that researchers had used modern laser imaging technology over several exploratory missions to document the remnants of an ancient settlement. With support from the Honduran government, National Geographic was able to catalog and document 52 carved stone artifacts from the site. The finds will be restored and preserved onsite.

National Geographic published extensive documentation of the unique project. A 20-page article on the Lost City of the Monkey God will be distributed worldwide to more than 60 million readers and in 15 languages. The organization also aired a documentary on its cable channel.

“This National Geographic feature will highlight what our country has to offer, and share Honduras’s story around the world,” said Hernandez.

The restoration and preservation process for Ciudad Blanca will begin in 2016. President Hernandez plans to build a research center in the city of Catamacas, and improve El Aguacate airport in nearby Olancho, for the thousands of tourists and scientists expected to visit the city and archaeological site.

“It’s exciting to think that we are participants in the study and discovery of an ancient civilization. This will increase our country’s cultural enrichment and provide a great attraction for archaeological and anthropological research in the international scientific community, as well as developing our touristic potential in the Olancho area,” said Hernandez.

Christopher Fischer, a National Geographic researcher, indicated appreciation for the contributions and support from the Honduran government and President Hernandez, “it was extremely important at the time of the initial explorations” in Ciudad Blanca, these preliminary findings will aid in the restoration of the 52 artifacts in 2016.

Additionally, John Francis, vice president of National Geographic, said that the partnership with Honduras dates back several decades, and this new phase is just another stage in the relationship between both parties.

Virgilio Paredes, director of the Honduran Institute of Anthropology and History said, “National Geographic’s work and the information they are publishing will present a previously unknown culture in addition to advancing Honduras in a variety of ways.”