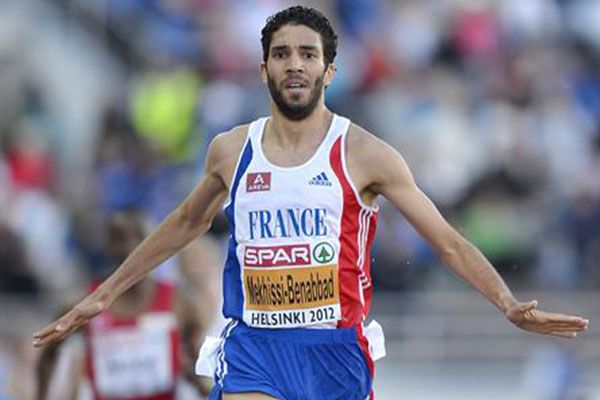 (CNN)– It may have seemed like a good idea at the time but Mahiedine Mekhissi-Benabbad’s bizarre celebration in the home straight of the men’s 3,000m steeeplechase at the European championships was to cost him dear.

Approaching the final barrier, the Frenchman had the race and gold medal in the bag, having a enough time in hand to showboat by stripping off his running vest before putting it into his mouth and waving to the crowd.

Fans in the Letzigrund Stadium in Zurich jeered as he crossed the finishing line clear of his teammate Yoann Kowal in eight minutes 25.30 seconds — his third straight victory in the event at the championships after 2010 and 2012.

The 29-year-old had the presence of mind to put his top back after the finish, but the damage was done.

He was initially shown a yellow card as a warning by an official, but an appeal by Spain on behalf of fourth placed athlete Angel Mullera led to his disqualification.

His French team lodged a counter-protest but that was rejected, with Mekhissi-Benabbad disqualified under IAAF competition rules 143.1, 143.7.

Mullera was promoted to the bronze as result of the ruling.

“I find that the protest lodged by the Spaniards is anti fair-play,” Ghani Yalouzsa, the technical director of the French athletics federation, was quoted by AFP.

But the double Olympic silver medalist is no stranger to controversy. After winning his 2012 Euro gold in Helsinki he was criticized for shoving a mascot who offered him a gift.

The year before, Mekhissi-Benabbad was involved in a punch-up with French teammate Mehdi Baala at the 2011 Monaco Diamond League meeting, trading blows while they were still on the track and earning a five-month suspension from their federation.