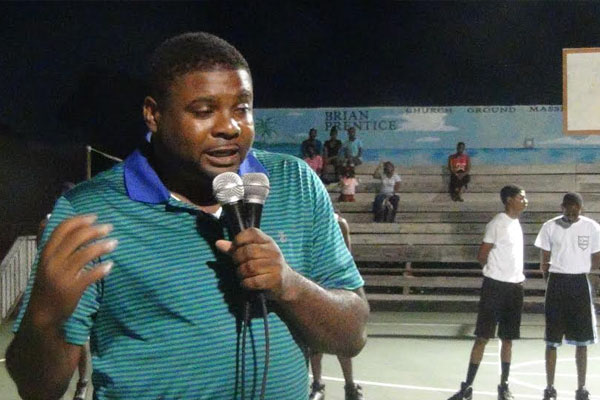 The first two matches of the league were preceded by a brief opening ceremony which was chaired by the President of the Nevis Amateur Basketball Association, Ms Wanda Parry who led out in the singing of the national anthem after an opening prayer by Warren COLUMBUS Bussue.

The featured speaker was the Hon. Troy Liburd who stood in for the chief sponsor of the league, the Hon. Mark Brantley.

Mr. Liburd lauded the efforts of the Hon. Mark Brantley who has ably filled the breach for the last several years in terms of sponsoring the league, after the untimely death of former representative for the area, in whose honour the league is being held, Hon. Malcolm Guishard.

‘Mr. Brantley loves the youths…..not only in this area, but all over Nevis and that is why he is making the effort to ensure that such a league is played, stated Hon. Liburd.

He also challenged the organizers of the league to utilize the social media to spread the good news of the tournament and challenged other sporting organizations to do the same. He noted that this will motivate the players and keep them in a positive frame of mind.

He then officially declared the league open.

The first match of the evening was a virtual ring dinger.

The more seasoned Police team, POLSTARS, engaged a team of School boys from the Charlestown Secondary School, known as the St.James’ Royals.

It was an exciting start to the league, as first the Law men, then the school boys got their scoring act together.

Both teams played with some degree of intensity and there were some tremendous plays throughout the match.

The scores remained even-steven right down to the last hoop.

With seconds on the clock, the school boys struck a crucial three pointer to level the scores and then went ahead with a two pointer. The Polstars then sunk one of two from the penalty spot. Make that 54 to 53.

The Law men raced away with the ball as the seconds ticked away, but a crucial two pointer was missed with an attempted layup and one of the school boys grabbed the rebound and held on for dear life until the final whistle went.

To a man, maybe except for an obviously thrilled Coach JAMAIKE, the school boys and their supporters hugged and danced on the court.

What a way to get the league on the way!