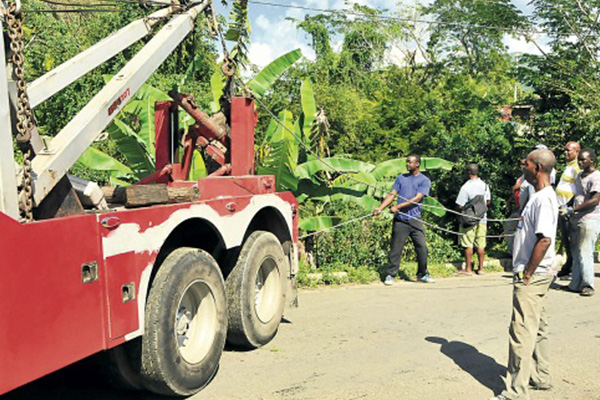 Jamaica (CMC) — The normally sleepy town of Riversdale, St Catherine was jolted into shock and grief yesterday when the motor vehicle being driven by a 60-year-old man plunged more than 70 feet from the historic rail-less Natural Bridge into a heavily vegetated precipice — a day after he celebrated his birthday.

According to the police, Luke Brown, who was visiting from Canada, had stopped by a cookshop in the vicinity of the bridge to purchase breakfast and was attempting to park his Suzuki Vitara on the slope near the bridge when the tragedy occurred.

“Him just come at the restaurant and ask what we have on the menu and we told him and him seh him going to park,” related Sheryl Jones, a worker at the cookshop.

She told the Jamaica Observer that as Brown — who grew up in the neighbouring community of Troja and was visiting relatives — attempted to park his vehicle, several people began to scream.

“All of a sudden mi see the van skid and then mi nuh see it again,” the distraught woman told the Observer.

The woman said she and others watched in horror as the vehicle, with a terrified Brown still clutching the steering wheel, skidded uncontrollably backwards then made angry contact with the waters below. For many, it was a surreal moment.

“I mean, we had to stand up and watch the vehicle going down. We couldn’t do anything. Nothing at all,” said Janeth Dunn, owner of the cookshop.

“It’s a regular thing for him to stop by here for food when he visits,” she told the Observer. “Mi feel it, feel it bad.”

But what was more painful for Dunn, relatives and residents was the difficulty faced by rescue workers to reach Brown.

After the near two-hour operation, they retrieved his lifeless body, battered and bruised with several broken bones.

Yesterday, the dead man’s brother, Alexander Brown, said he was at home when he received the news.

“I was at my home when someone called me on my phone and told me that me brother ran off the road and that was when I rushed from home and came here,” said the younger Brown.

The tragedy took place a day after he had visited family to celebrate his birthday.

“It was just yesterday we gathered as a family and sat and spent some time together. We were also planning to go on the road today. He was my best brother,” said the distraught Brown.

The mishap drew a massive crowd to Natural Bridge, dubbed the ‘Eighth Wonder of the World’ by residents because of its natural formation — a hole in a massive rock. It serves as a mini attraction for visitors to the area, who dare to descend the near 200 steps on a steep incline to view the piece of artwork created by nature.

“It really leaves all of us in shock to know that this was the man’s regular area where him stop any time him come to Jamaica,” said Ann Marie Brown, a resident.