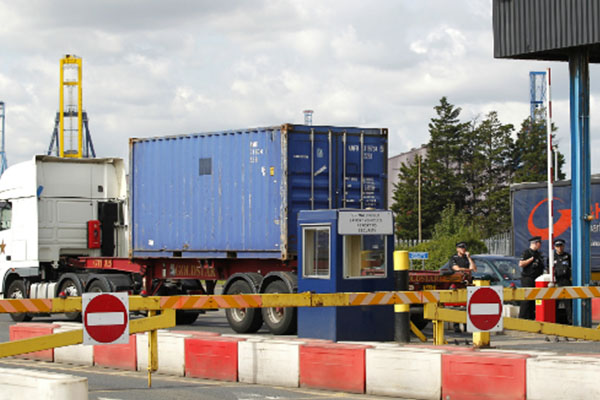 TILBURY, UK (AFP) — A man was found dead and 34 others still alive in a shipping container on Saturday after staff at a British port heard banging and screaming coming from inside.

The men, women and children, all believed to be from the Indian subcontinent, were discovered inside the container at Tilbury Docks, east of London, on a ship that came from the Belgian port of Zebrugge.

All the survivors were taken to nearby hospitals; two were in a serious but not life-threatening condition, while the others were suffering from dehydration and hypothermia.

Because a body was found, Essex Police has launched a homicide investigation.

The local force also vowed to bring to justice anyone involved in putting the people in the container.

Of 50 containers aboard the P and O ship that arrived early Saturday, police have opened 30 so far to check for any other people.

“As a result of that noise, staff were alerted and immediately breached the container to find 35 persons within that unit.

“We believe them to come from the Indian subcontinent.”

The dead man was pronounced deceased at the scene.

“It is a homicide investigation from the police point of view,” Roe said, but added: “This is a humanitarian issue and the welfare of these patients is a priority.”

Officials have faced a language barrier in their efforts to communicate with the survivors.

Roe said once the survivors are fit and well they will be formally interviewed through interpreters.

He said the police investigation would look into “the gangs or whoever may be involved in this conspiracy to bring these people in this way over to this country.

“Clearly we need to try to bring them to justice.”