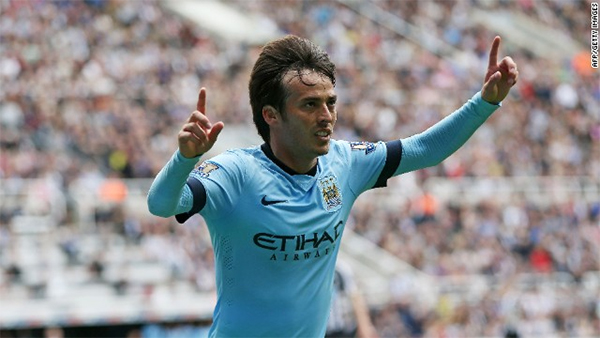 CNN — Reigning English Premier League champions Manchester City began the new season as they ended the last, at the top of the table.

But City was made to work hard for their 2-0 victory against a lively Newcastle United side.

The match began with floral tributes for two Newcastle fans who died when flight MH17 crashed in eastern Ukraine last month killing all 298 on board.

John Alder and Liam Sweeney were traveling to New Zealand to watch their team play in a preseason tournament before tragedy struck.

On 17 minutes the stadium broke out into a minute’s applause in their honor.

On the pitch Newcastle more than matched City, creating almost as many chances. Crucially, they couldn’t get a single shot on target and with half time approaching, Bosnian international Edin Dzeko superbly controlled a long ball over the top of the defense before back-heeling it into the path of David Silva who slotted home.

“I think we deserved it,” Man of the Match Dzeko told Sky Sports after the game. “We played aggressive and they didn’t have any chances.”

Earlier in the day, Liverpool began life without Luis Suarez with a 2-1 victory over Southampton.

Suarez had been in phenomenal form since his arrival at Anfield in 2011, scoring 69 goals in 110 games. Last season had been his best yet, driving Liverpool to a second place finish and narrowly missing out on the club’s first Premier League title.

Yet his time had always been filled with controversy

He arrived after serving a suspension for biting a player whilst playing in the Dutch league, and was suspended again for biting Chelsea defender Branislav Ivanovic.

However, after being sanctioned for biting a player at this summer’s World Cup finals — a four month ban from all football related activities — Liverpool sold him to Barcelona.