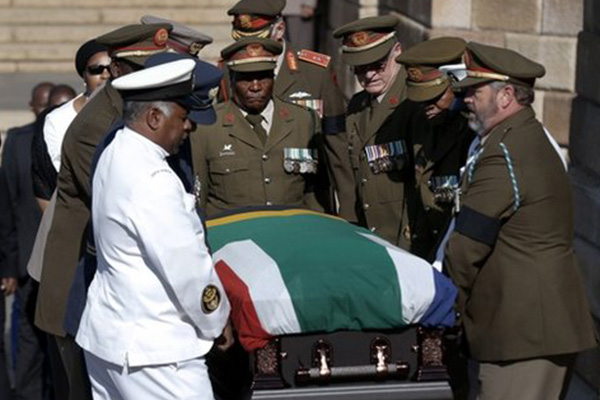 (BBC)—South Africans have been warned not to attempt to go to see Nelson Mandela’s body in the capital, Pretoria, unless they are already in the queue.

The anti-apartheid leader’s body is lying in state at the Union Buildings, where he was sworn in as South Africa’s first black president in 1994.

Tens of thousands have been flocking to the venue to pay their respects.

Mr Mandela will be buried at his ancestral home in Qunu on Sunday. He died on 5 December aged 95.

Friday is the last of three days for people to file past the body in Pretoria after which it will be flown to the rural area of the Eastern Cape where he grew up.

The authorities have closed one of main park-and-ride areas at the Pretoria Showgrounds, and the crowds lining up for buses have all gone home without any trouble.

Earlier, the government said it could not guarantee everyone already waiting for buses would get in.

The BBC witnessed a sizeable group of people breaking through police lines into the Union Building gardens towards the front of the queue, but they were then contained by officers.

Collins Chabane, the minister in the South African presidency, says 21,000 mourners viewed the body of Mr Mandela, known by his clan name Madiba, on Wednesday.

The next day 39,000 did so and an estimated 4,000 people an hour have been paying their respects on Friday.

On Tuesday, tens of thousands of South Africans joined scores of world leaders for a national memorial service as part of a series of commemorations for Mr Mandela.

The African National Congress (ANC) has apologised for any offence caused by the sign language interpreter who was hired for the memorial service for Tuesday.

Sign language experts said his gestures did not make any sense. But Thamsanqa Jantji has denied being a fraud, and said he had schizophrenia and panicked on stage when he began hallucinating.