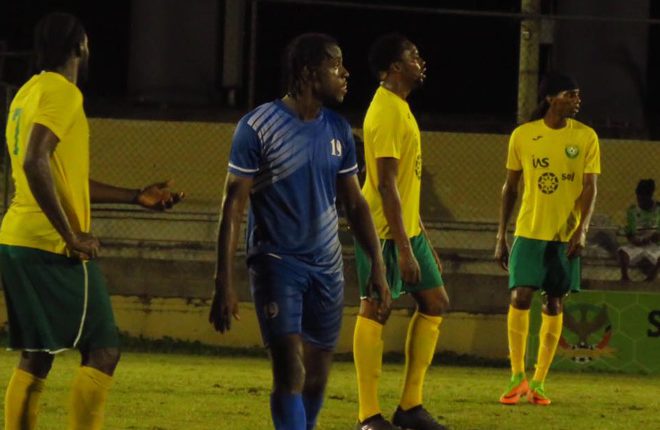 Manager of Mantab Clovis Liburd said considering that the team lost their first two matches of the season, they were motivated to win this match. “After we played the two games before, seen what we have to put out, especially in the second game, we knew we have something to take from the third game. All we have to do is keep fighting, keep pushing and don’t give up,” Liburd said. Coach Alexis Morris of Conaree said his team gave their best but suggested they have to take this loss on the chin and move on. “The only thing that we failed to do is failed to do is basically outscore them in terms of the number of goals that we got and that was difference between them and us this evening…if you look at the number of shots we had on target. It was always in our favour but like I said we were unable to capitalize on the most important department of the game,” Coach Morris said.

In the second match of the Saturday’s double header President’s Cup champions Flow 4G Cayon Rockets, came from behind to defeat Elco Ltd. St. Peters 2-1. Dijhron Simmonds got on the score sheet in the 12th minute, scoring the first goal of the season for St. Peters. Cayon regrouped and came out in the second half with a lot more purpose, earning a goal in the early stages of the second half, forcing St. Peters goal scorer Simmonds to score an own goal in the 48th minute. Kurt Morton scored in the 52nd minute to ensure that Cayon sealed the three points. Trevaughn Pemberton of St. Peters was sent off after picking up a second yellow card in the 77th minute. He had received a yellow card in the 45th minute. Assistant Coach Jazza Buchanan of Cayon said the team is experiencing in a lot of injuries which hampered their performance. But at half time, he said the players were left alone in the locker room to figure out what they needed to do to win the match, which eventually they did.

“Me and the coach, we did not go in the (locker room) with them. We let them figure it out,” Buchanan said. “There were in their working it out and then I went in to see what was going on. I think the guys went out there and fix what was going wrong for us,” he added.