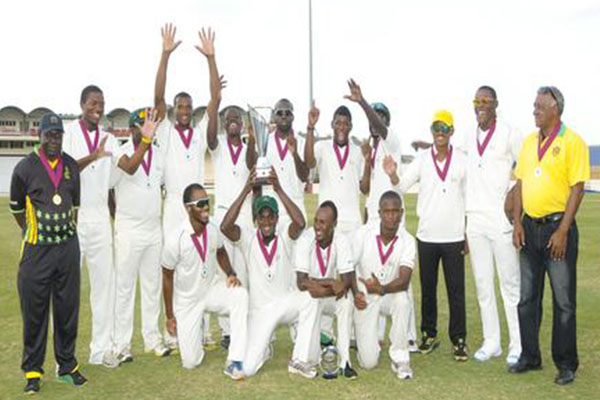 Blackwood completed his maiden first-class hundred of 118, propping up the Jamaicans’ batting, as they were dismissed for 200 in their second innings about half-hour before lunch on the last day of the finale to the Regional 4-Day Tournament.

This left the Windwards to chase a highly improbable, if not impossible target of 376 on a docile Beausejour Cricket pitch, and Ambris used the relaxed atmosphere to carve out his second first-class hundred of 102, as Windwards reached 204 for six in their second innings when play ended an hour before the scheduled close.

The result meant that the visitors clinched the Trophy by virtue of accumulating a higher number of points in the match. They ended with eight, including two batting points and three bowling points, while the Windwards finished with five.

Blackwood, a graduate of the Sagicor West Indies High Performance Centre, struck 15 fours and two sixes from 170 balls in 3 ¾ hours.

He reached his hundred from 159 balls, when he dragged a delivery from left-arm medium-fast bowler Kenroy Peters into square leg for a single.

Blackwood shared two vital tail-end stands – 33 with Damion Jacobs for the eighth wicket and 30 with Sheldon Cottrell for the last wicket – before being caught at straight mid-wicket off Windward captain Liam Sebastien, bowling his off-spin, to bring the Jamaica innings to a close.

Peters was the most successful Windwards bowler with 6-66 from 17 overs, Mervin Matthew grabbed 2-35 from 11 overs and Sebastien grabbed 2-46 from 18 overs.

He reached his hundred from 118 balls, when he lofted Andre McCarthy, bowling his uncomplicated off-spin, over long-on for his only six.

Along the way, he put on 58 for the third wicket with veteran left-handed opener Devon Smith and shared 83 for the fifth wicket with his elder brother Romel Currency before he was caught behind chasing a delivery from McCarthy.

Smith hit 40 and fellow opener Tyrone Theophile got 22, but no other Windwards batsman made it to 20.

McCarthy ended with 2-13 from five overs and leg-spinner Jacobs finished with 2-75 from 22 overs.

There was a bizarre twist to the day, when the players seemed content to end play at tea-time with both teams meeting halfway between their respective dressing rooms for the typical post-play shake of hands.

Ground-staff had extracted the stumps and started to water the outfield, but were soon informed that play would resume as scheduled after the break.

Under tournament rules, play on the last day could not be ended until 75 overs had been bowled on the day or 4 p.m. East Caribbean Time (Jamaica minus an hour), whichever is the later.