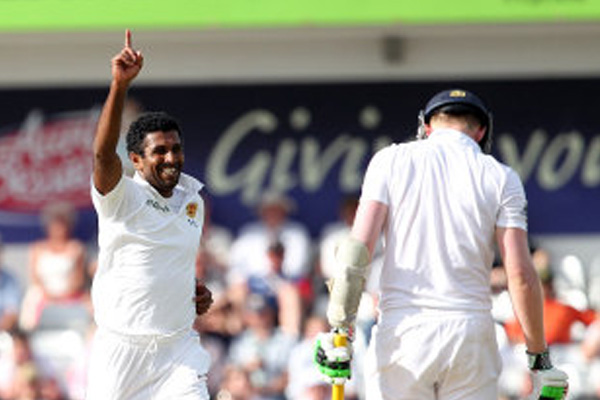 Sports Page –- Sri Lanka have never won a Test series in England, but they are closing in on a magnificent achievement after their captain, Angelo Mathews, with a brilliant domineering hundred, followed by a scarcely credible spell from Dhammika Prasad consigned England to a day of untold gloom in the second Test at Headingley.

Prasad was the fifth Sri Lanka bowler used in an England second-innings innings which only amounted to 26.2 overs at the tail end of the fourth day, but he bustled in to such staggering effect that he demolished England with 4 for 15 in six overs, bowling the fuller Headingley length that a browbeaten England’s attack had found quite beyond them. Headingley danced to his tune.

For England, defeat seems only a matter of time. A few balls have started going through the surface, the forecast is set fair for the final day and, even allowing for the time difference, they should still be celebrating in Colombo by sunset.

This will go down as one of the most treasured days in Sri Lanka cricket history. It was also an increasingly shambolic display by England. They looked weary with the ball and then blundered to 57 for 5, a target of 350 receding over the horizon, on the same slow, dry surface on which Sri Lanka had made 457.