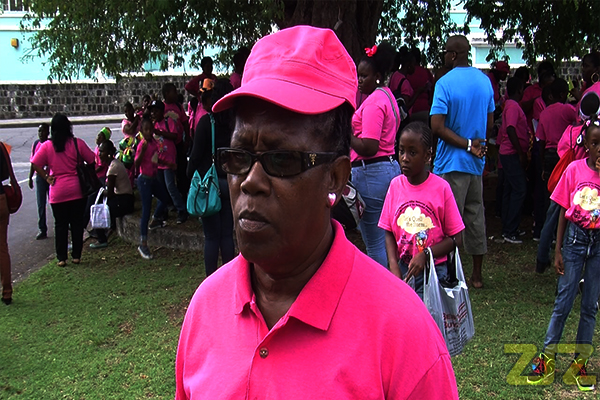 Maurice Hillier’s No TV Week Ends with March through Basseterre

[ZIZ]–The students and teachers of the Epworth/Maurice Hillier Memorial Junior School took to the streets Friday morning for the final activity to mark their annual “No TV Week.”

Backed by a hi-fi system, the school marched through the streets preaching the message to turn off the TV and tune into the family.

This year’s week of activities was held under the theme “Let’s Quell the Storm, Take Bullying by the Horn.”

Principal Icilma Springer said bullying is a problem in many schools and they felt it needed to be addressed.

“We have recognized in our schools that we have children who behave in a certain way; as though they are bullies and we have recognized around the Caribbean, and the wider world, that this is becoming something that children like to do. So at Maurice Hillier we are nipping it in the bud,” she explained.

Parent, Thamesha Fyfield said her daughter has been bullied about her height and parents need to realize that bullying can take various forms.

She said, “Things that they take for granted like name-calling, simple words that they might say to a child do hurt and that is a form of bullying. As simple as it may seem, a simple name given to a child can hurt.”

She urged other parents to sit down and talk with their children to end the cycle of bullying.

“Bullies are normally affected by bullying themselves so they react that way because that’s the only way that they know how to. So my plea to parents out there is, please, take time with your kids, teach them about the different types of bullying; whether it’s physical bullying or mental bullying because bullying often leads to abuse in the future.”

The march wrapped up a series of activities which featured sub-themes such as “bullying makes us crazy” and “pair up against bullying.”