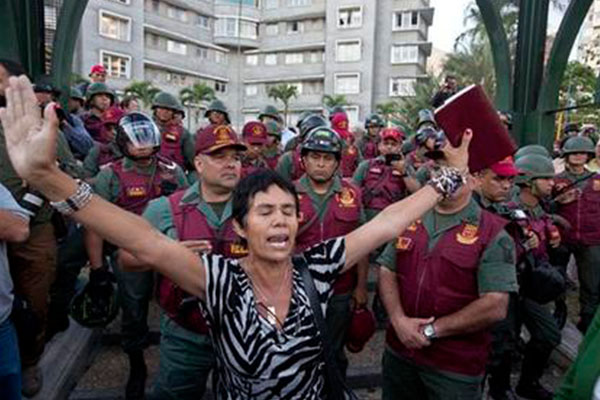 CARACAS, Venezuela (AP) — Agents of Venezuela’s domestic intelligence service on Wednesday arrested the opposition mayor of San Cristobal, a western city that has seen some of the fiercest anti-government protests.

Mayor Daniel Ceballos was detained by the Bolivarian National Intelligence Service, known by its Spanish initials SEBIN, in Caracas, according to this aide, Ronni Pavolini.

“They took him out of the hotel in Caracas and took him to Helicoide (SEBIN headquarters),” Pavolini told The Associated Press. Ceballos was in Caracas for a meeting of opposition mayors.

“This is an act of justice for a mayor who not only did not meet his obligations as required by law and the constitution, but also facilitated and supported all the irrational violence in San Cristobal.” He added that a National Guardsman had also been fatally shot Wednesday in San Cristobal while confronting vandalism at a university there. That would be the fifth National Guardsman killed in the protests.

Anti-government protests that have shaken Venezuela for more than a month began in early February with students in San Cristobal. The opposition stronghold along the border with Colombia has seen intense clashes between authorities and protesters frustrated by high inflation, soaring violent crime and shortages of basic items such as cooking oil and toilet paper.

Just outside San Cristobal earlier Wednesday, National Guardsmen firing plastic shotgun pellets and tear gas wounded at least 16 people in the town of Rubio as they cleared barricades that had been up for weeks, local officials said.

The government already has one opposition leader, Leopoldo Lopez, in jail on charges of arson and conspiracy. And on Tuesday, the National Assembly voted to start a process to strip opposition lawmaker Maria Corina Machado of her immunity so they could eventually bring charges against her for allegedly trying to destabilize the government.

In Caracas, meanwhile, officials said a municipal worker was shot and killed while removing a street barricade in a middle-class neighbourhood. His death raised to 27 the official toll from more than a month’s worth of protests.

According to preliminary information from the federal prosecutor’s office, Francisco Alcides Madrid Rosendo, 32, was shot multiple times around 10 p.m. Tuesday while he and others were taking down a barricade in the Montalban neighbourhood in Caracas’ western section.

Pro-government Caracas Mayor Jorge Rodriguez through his Twitter account blamed unnamed “terrorists” for the killing, but provided no other details.

In Rubio, local officials and residents reported an intense effort by the National Guard to clear protesters’ barricades that had sealed off neighbourhoods for weeks.

“The situation is terrible here,” Francisco Rincon, vice president of the Rubio municipal council, told The Associated Press. He said soldiers with rifles were on the street corners. He said he had counted 16 wounded, four of them by bullets.

Rincon, who is a member of the opposition Popular Will party, said their supporters had protested peacefully in the morning before being dispersed by tear gas and plastic buckshot by National Guardsmen and pro-government civilians.

The prosecutor’s office did not immediately comment on another unrelated death reported Wednesday in the western state of Tachira, where the circumstances were unclear.

Raul Casanova, the rector of the National Experimental University of Tachira, told The Associated Press Wednesday that 18-year-old Anthony Rojas was fatally shot Tuesday night in Tariba, on outskirts of San Cristobal. Casanova said Rojas, a mechanical engineering student at the university, had participated in past opposition protests in San Cristobal, but was not doing so when he was shot.

Casanova said one of Rojas’ family members told him that the young man was shot when he ran into an armed confrontation while going to a liquor store.

But Jorge Mora, the opposition president of the Tariba council, told the AP that Rojas was followed by armed government supporters and when he tried to hide in a store “they came by shooting.” Another woman was wounded in the attack, Mora said.

Machado, the opposition lawmaker, was expected to speak Friday at a meeting of the Organization of American States in Washington about the situation in Venezuela. Because the Venezuelan government controls the country’s seat, Panama has offered Machado its seat to make her presentation to the regional body.

Venezuela accuses her of civil disobedience and trying to destabilise the government.

Machado told a reporter from The Associated Press who was on the same flight to Miami on Wednesday that she was “very worried” about the effort to bring criminal charges against her.

“It’s fundamental that the world understand what’s happening in our country,” she said of her upcoming appearance before the OAS.

The body earlier this month approved a declaration supporting President Nicolas Maduro’s efforts to start a dialogue with the political opposition. Panama, the United States and Canada voted against it.