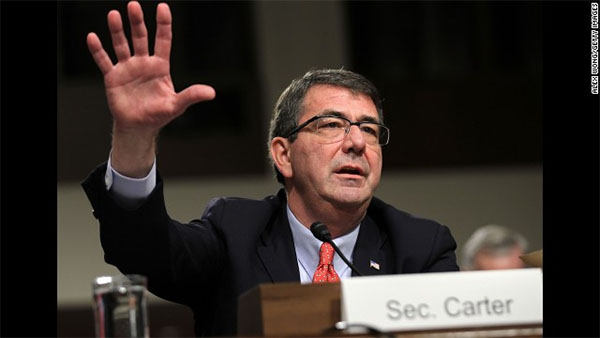 Washington (CNN) — Ashton Carter, the former second-in-command at the Pentagon, appears to be the top choice to replace outgoing Secretary Chuck Hagel.

An administration official had said that Homeland Security Secretary Jeh Johnson, a former General Counsel at the Pentagon, was also still on the list of possibilities, but on Tuesday morning, sources said Johnson was no longer being considered. The prospect of an additional confirmation hearing for Johnson’s replacement if he were to move to the Pentagon as the Senate switches to Republican control would have been problematic for the White House.

Hagel announced his resignation last week, but has said he will stay on until his successor is confirmed by the Senate.

Carter, who served as Deputy Defense Secretary under both Leon Panetta and Hagel, would bring a wide range of experience to a department confronting multiple crises in the Middle East and preparing to enter a new phase in Afghanistan as the NATO combat mission ends.

Carter’s ability to hit the ground running from his past experience at the Pentagon, in addition to the respect many senior military leaders have for him are seen as major benefits to winning confirmation should Obama nominate him.

“His career has sort of prepared him perfectly for this kind of a moment,” says Michael O’Hanlon, a defense industry analyst at the Brookings Institution.

In addition to a broad understanding of the Pentagon bureaucracy, Carter is seen as a master of managing large budgets, a premium in the present era of continued belt tightening on Capitol Hill, as well as an expert on weapons acquisitions.

He also has a firm grasp on understanding the trends and technology of warfare in the future.

“On paper and in terms of his resume and preparation you probably couldn’t do much better,” O’Hanlon said.

But Carter does lack certain experience shared by Hagel, Panetta had and many other secretaries – first–hand military experience. Carter has extensive experience at the Pentagon and in academia, but he was never actually in the military.

“You can always find things that you would have loved in a hundred year life span to have seen everyone do before they take this job, but realistically he has accomplished about as much as you could ask,” O’Hanlon said.

Whoever is ultimately selected may not have much opportunity to make a mark at the Pentagon. They’ll likely have less than two years likely on the job after confirmation. The next defense secretary will confront the specter of another possible round of automatic budget cuts known as sequestration to navigate with Congress, along with a White House known by some for micromanaging foreign and defense policy.

While Carter was always seen likely on Obama’s short-list of candidates, his name gained prominence following the withdrawals from consideration by former Pentagon official Michele Flournoyand Sen. Jack Reed that they not be considered for the post.

Carter, who does not have a background as a political operative, is believed to be open to returning to the Pentagon, and would likely generate a smooth confirmation process officials tell CNN.

He was previously a professor at Harvard’s Kennedy School, and was recently listed as a senior executive at the Markle Foundation.