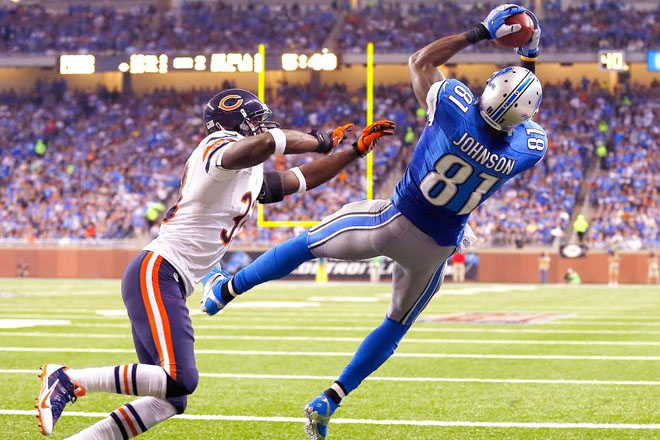 Megatron: I Once Understood Catch Rule, Now I Don’t

The answer remains murky to many, both inside the game and out. The latest controversy came Sunday, when replay review credited Lions wide receiver Golden Tate with a touchdown against theBears after officials on the field initially ruled Tate had lost possession of the ball, leading to an interception.

The rule book benefitted a receiver in this case, but typically it’s the defense that gets good news when the replay command center takes over. Devonta Freeman had a touchdown wiped away in Week 5; in Week 3 it was Bengals tight end Tyler Eifert’s turn to lose a score. The Cowboys might have been playing for a trip to the Super Bowl last January if Dez Bryant’s fourth-quarter reception at Lambeau Field wasn’t overturned in the divisional playoffs.

And then there’s the Patient Zero of the NFL’s catch rule, Lions wide receiver Calvin Johnson. Megatron had a potential game-winning touchdown grab against the Bearswiped away in September 2010 because officials ruled that he failed to maintain control of the ball after he touched the ground. “The Calvin Johnson Rule” entered our lexicon.

For many, the play seemed to expose the catch rule as being counterintuitive. This week, Johnson was asked his thoughts about the league’s lingering controversy.

“I thought I understood the rule,” Johnson said, per the Detroit Free Press. “I don’t think anybody does now.”

On Tuesday’s edition of NFL Total Access, NFL Network’s Dan Hellie asked Dean Blandino, the league’s vice president of officiating, if he ever found himself confused by the catch rule.

“I’m never confused, but I’m certainly always looking to see if we can simplify things and believe me, we don’t want to have rules where people are confused and not sure what is a catch and what isnt a catch,” he said. “I feel like we do have good rules, but we’re always going to evaluate them and tweak them when needed.”

That Blandino even has to seriously answer that question tells you that the NFL still has work to do.