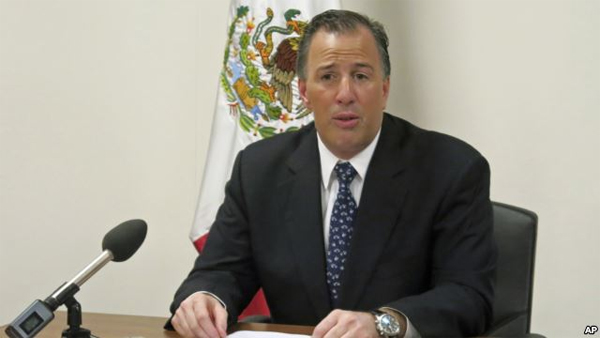 “Mexico is convinced that the practice of espionage committed constitute a violation of norms, an abuse of the trust built between partnering countries and does not honor the historic friendship between our nations,” he added.

Speaking in Geneva, Meade said he would summon U.S. Ambassador Anthony Wayne upon his return to Mexico.

On Sunday, Mexico’s government said such spying would be unacceptable, illegitimate and against the law.

Meade demanded a swift investigation, noting that U.S. President Barack Obama had vowed to investigate when earlier allegations of spying surfaced in September.

“Mexico finally reiterates its confidence in the conviction of President Obama that international law is not an empty promise,” Meade said. “We are sure that the promise of an investigation made with Mexico is not either.”

The new allegations drew a sharp response from Calderon in a series of Twitter posts on Monday.

“More than personal, it is an assault on the institutions of the country, given that it was done when I was the president,” Calderon said. “I will be following the steps the Foreign Ministry takes to demand explanations from the United States and the corresponding account of responsibility.”

A senior U.S. State Department official told CNN the Mexican government reached out about the report and that the two governments will be discussing it via diplomatic channels.

The NSA said it would not “comment publicly on every specific alleged intelligence activity, and as a matter of policy we have made clear that the United States gathers foreign intelligence of the type gathered by all nations.

“As the President said in his speech at the U.N. General Assembly, we’ve begun to review the way that we gather intelligence, so that we properly balance the legitimate security concerns of our citizens and allies with the privacy concerns that all people share,” the agency added.

The statements were the latest sign of international fallout over apparent Snowden leaks.

Separately, the United States and Brazil agreed in September to postpone Brazilian President Dilma Rousseff’s state visit to Washington over reports the United States spied on her communications. That case of alleged NSA surveillance was also linked to apparent Snowden leaks.

And on Monday, the U.S. ambassador to France met with French diplomats over allegations the NSA intercepted more than 70 million phone calls in the European nation over a 30-day period. Those allegations were reported by France’s Le Monde newspaper, citing documents leaked by Snowden.

Snowden has admitted to leaking documents about U.S. surveillance programs and faces charges of espionage and theft of government property in the United States. He is living in Russia after receiving asylum.

CNN has not independently verified the reports citing leaked documents by Snowden.