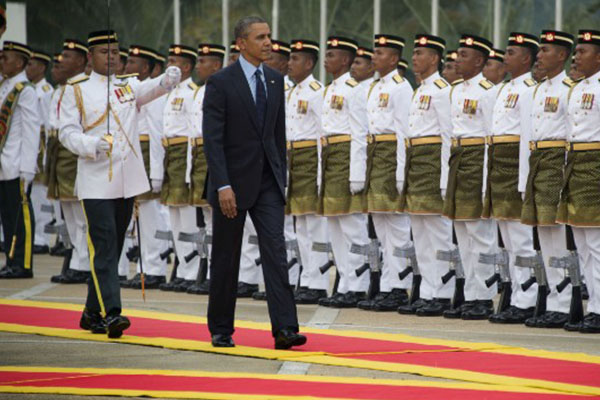 (CNN) — President Barack Obama is the first American leader in decades to visit Malaysia, the Asian nation grappling with the mystery of a vanished jetliner.

Obama landed in Kuala Lumpur on Saturday, seven weeks to the day Malaysia Airlines Flight 370 disappeared with 239 people aboard.

He’s remained largely quiet over the issue amid an international underwater search focusing on the southern Indian Ocean.

A day before his arrival, he told a Malaysian newspaper, The Star, that the U.S. remains committed to the search.

“The United States was one of the first countries to join in the search for the missing plane,” he said.

“U.S. Navy ships, aircraft and personnel remain on the scene, assisting in the search. Our FBI is working closely with Malaysia on the investigation into what caused the aircraft to disappear. And we’ll continue to offer our support and assistance as the search and investigation continue.”

Obama will discuss the search for the missing plane with Malaysia’s Prime Minister, Deputy National Security Adviser Ben Rhodes told reporters, but it will not be the only item on the agenda.

Malaysia is a growing partner of the United States, which seeks to deepen that relationship, Rhodes said.

Topics of discussion between the two leaders will include trade, security and regional issues, he said.

Obama’s visit comes as the initial search by the Bluefin-21 nears its end.

The submersible, which is on contract to the U.S. Navy, is scouring the ocean floor for traces of the plane.

Previously, another device, a “towed pinger locator” detected signals that officials believed were from its flight recorders, which determined the current search area for the Bluefin.

The underwater sonar device plunged into the Indian Ocean on Saturday, kicking off its 14th mission.

It has slowly scoured 95% of the ocean floor that searchers had narrowed down for it. So far, it has found no trace of the missing jetliner.

If the Bluefin-21 searches 100% of the area with nothing to show for it, the underwater search may expand Australian officials said.

A U.S. Navy source told CNN on Friday that the current search area is expected to move slightly north if the Bluefin doesn’t find any wreckage. Specifically, it might shift to encompass a 6-mile radius around where another “ping” was detected.

The underwater search so far has focused on a circle with a 10-kilometer (6.2-mile) radius around the location of a detected “ping,” the Joint Agency Coordination Center said.

“We are currently consulting very closely with our international partners on the best way to continue the search into the future,” the Australian-based center coordinating the search said in a statement.

The plane disappeared after leaving Kuala Lumpur, Malaysia, for Beijing.

Malaysian Prime Minister Najib Razak has said a preliminary report on the plane’s disappearance will be available to the public next week.

He also asked an internal investigation team to look into what other information may be released publicly next week, his office said.

The report has been sent to the International Civil Aviation Organization, the U.N. body for global aviation, but not yet made available to the public.

The U.N. organization said among the safety recommendations in the report is a suggestion by Malaysia that the aviation world needs to look at real-time tracking of commercial aircraft.

It’s the same recommendation that was made after the Air France Flight 447 went down in the Atlantic Ocean in 2009.

“Anytime there is a tragedy like this we ought to also reflect on what can be done going forward to prevent something similar from happening again,” Obama said.

“That discussion has begun in Malaysia and around the world, and we’ll see what improvements might be recommended to continue improving aviation security. One thing is already clear, however, is that large international efforts like this search operation benefit from existing partnerships among nations.”

Obama, who will be in Malaysia until Sunday, is the first U.S. president to visit Kuala Lumpur in almost 50 years.

He leaves for the Philippines on Sunday, where he will remain until his departure for the United States on Tuesday.