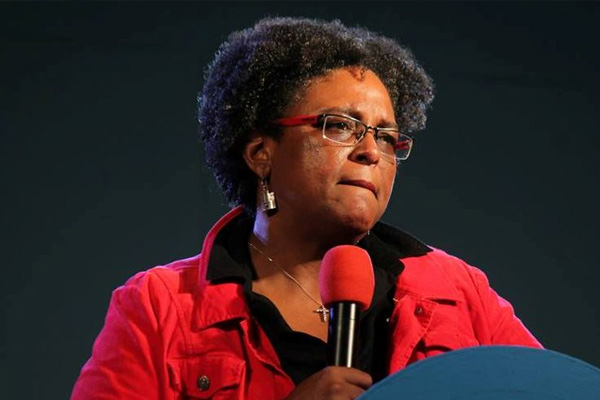 Bridgetown, Barbados CMC — Opposition Leader Mia Mottley has disagreed with a position adopted by the government that the island has been able to reverse its downward economic slide and was now poised for growth in the coming years.

Speaking during the debate on the 2015-16 estimates of expenditure and revenue, Mottley said that the government’s policies were “literally choking out every ounce of space we have to stabilise, trigger growth, or to protect the vulnerable in this country”.

Earlier, Finance Minister Chris Sinckler said that the home grown fiscal adjustment and stabilisation programme had started to bear fruit with the economic growth recorded in 2014 being 0.3 per cent. He said that the economy should grow between one and two per cent this year.

“At the end of this current financial year the primary balance will improve from negative 385 million dollars (One BDSs dollar =US$0.50 cents) to a surplus of 56 million dollars,” Sinckler said as he led off the week long debate on the fiscal package.

He told legislators it would mean that for the first time since 2011, Barbados is running a primary surplus “and we are on our way to restoring the fiscal well being of the country.

But Mottley told legislators that despite borrowing BDS $450 million “to prop up the reserves”, the absence of an investment grade credit rating had increased the “pain” for the population.

“The minister of finance spoke as if his measures have been a success. Well, he is entitled to look through rose-tinted glasses but we have to deal with the reality,” she said.

Mottley said there had been a BDS$100 million dip in foreign reserves in the last 19 months despite the government borrowing and that the fiscal deficit was now 7.2 per cent of gross domestic product (GDP) when 2.8 per cent was the target.

She said in addition, the government had introduced several fiscal measures including the layoffs within the public sector; removal of the reverse tax credit; introduction of new taxes such as the Municipal Solid Waste Tax, the Consolidation Tax and cuts in subsidies to the Queen Elizabeth Hospital among other institutions.

“What have Barbadians borne that sacrifice for? Only to find out today, at the end of the 19 months, that your reserves are still BDS$100 million worse than when you started, in spite of the fact that you borrowed $450 million, and that your deficit is twice as bad as when you set up on this journey.

“You cannot have a situation which is twice as worse as you said it should be and then tell us we are on the road to recovery,” she said, adding what’s more government has continued to rack up debt to the tune of BDS$11 billion, a significant jump from the BDS$5.6 billion in 2008.

“If we were to take their numbers, with a Sam Lord’s Hotel, with 25 per cent of that debt this government should have been showing us at least five 300-room hotels.. .but instead all it can show us is liability to pay.”

The Opposition Leader said that in order to create the “optics of success rather than the reality of a mission out of control”, Finance Minister Sinckler had spoken about government recording a primary surplus for the first time since 2011.

She said the finance minister had not taken into account the interest payable on Government’s debt. To exclude that payment she said was “to live in a false world.

“If the Government of Barbados can move to a situation where in these Estimates of Expenditure and Revenue it can ignore the liability to interest which has now grown to almost $700 million – almost twice what it costs us to support the health sector – then we are living in a false world and this is an exercise that will only fool those who want to feel good.”

Former Prime Minister Owen Arthur is making his contribution to the debate on Tuesday.