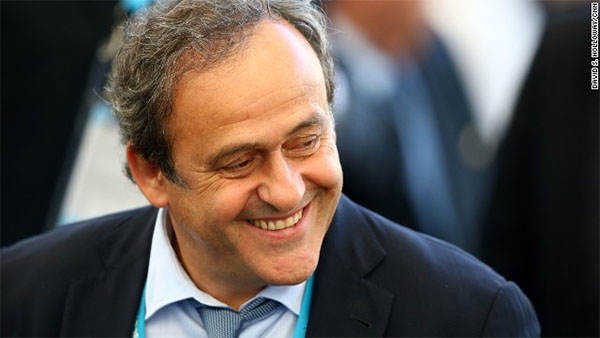 (CNN) — Michel Platini has broken his silence over FIFA’s refusal to publish the long-awaited report into the bidding process for the 2018 and 2022 World Cups.

“As long as the regulations of the FIFA code of ethics regarding the actual investigation are respected, I support the publishing of the Garcia Report,” the Frenchman told CNN Thursday.

“I have no issue with the findings and recommendations of the report being made available to the public.”

FIFA president Sepp Blatter has stated that the report — compiled by Michael Garcia, head of the world governing body’s investigative chamber of the ethics committee — will not be published because of fears over witness confidentiality.

Hans-Joachim Eckert, head of FIFA’s adjudicatory chamber of the ethics committee, is expected to reveal his decision on sanctions next year.

American lawyer Garcia is among those who have urged FIFAto publish the report but Platini’s statement of intent is the most significant yet — he is the highest profile member of the football world to oppose Blatter’s position.

“After he met with Mr. Garcia earlier this year, the President said he liked speaking with him and that his team was objective, concrete and straight.

“He likes dealing with people who are like that.”

Platini, who openly revealed he voted for Qatar to be awarded the 2022 World Cup, believes FIFA must become more transparent in their dealings. He did rule out challenging Blatter for the presidency next year.

The 59-year-old made clear his feelings about FIFA during a speech in Monaco last August where he spoke of the need for the organization to be open and accountable.

“We all want a FIFA that functions better, that is more transparent, that shows more solidarity, and that football fans hold in higher esteem,” he said.

“I will do everything I can, at my level, to contribute to this.”

Platini’s public support for the publication of the report follows views expressed by a number of Executive Committee members, who believe FIFA should disclose not just the results but also the findings.

Sunil Gulati, the president of U.S. Soccer, has urged FIFA to publish the findings and recommendations of the report, as have FIFA vice-presidents Jim Boyce of Northern Ireland and Prince Ali bin al-Hussein from Jordan.

Prince Ali, FIFA’s Asian vice-president, took to Twitter last week to give his views on the matter, urging for more transparency.

“In the interest of full transparency, I believe it is important that the much-anticipated report on the ethics investigation that is crucial to ensuring good governance at Fifa is fully disclosed and open to the public,” he wrote on Twitter.

“This will only help the football community move ahead in reforming our institutions in the best interest of the sport.

“The entire football family as well as its sponsors and those who follow the game worldwide have a full right to know the contents of the report in the spirit of complete openness.”

Blatter’s position has been boosted by FIFA’s legal director Marco Villiger, who said that witness confidentiality could prove difficult to sustain if the report was published.

“The code of ethics is based on certain principles, one of which is confidentiality,” Villiger told reporters.

“Cooperation between witnesses and the ethics committee is based on confidentiality, if not perhaps certain witnesses, whistleblowers or other parties might not cooperate to such an extent,” he said, adding that 75 witnesses had been heard during Garcia’s investigation.