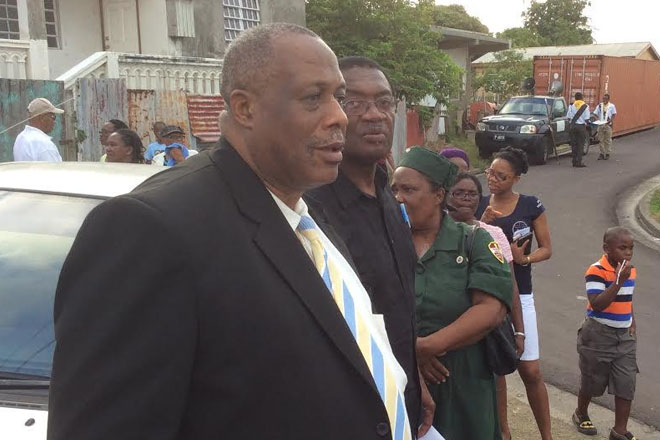 Basseterre, St. Kitts (SKNIS) — Parliamentary representative for constituency 8, the Honourable Eugene Hamilton stood with more than 200 constituents on Sunday (July 19th) for a Street March against Crime and Violence.

The march was organized by the Cayon Seventh Day Adventist Church as part of its civic responsibility to promote peace, tolerance, love and respect in the community. The residents bore placards denouncing crime as they made their way from the church in Water Works to Maynard’s Park.

At a rally after the march, Minister Hamilton told the gathering that there has been a significant reduction in reported crime based on statistics, but more had to be done to address violent and gun incidences.

“Our community of Cayon has contributed to that unhealthy and unacceptable reality and this expression of solidarity with the Seventh Day membership is a demonstration of our government’s commitment to crime reduction and to the saving of our misguided youngster’s lives,” he stressed, noting that residents should never be tolerant of crime and violence.

“We are the occupants of this small but unique space; and it is we who must pause to realise that society is shaped by our conduct; We ought to realise that people do what we inspect (see) and not what we expect; and that is why we who occupy this small space must take responsibility for policing, inspecting and cracking down on the conduct of our youthful neighbors that are inclined to deviant and criminal behavior.”

Minister Hamilton holds the portfolio for health in the federal government. Reports from the Chief Medical Officer indicate that a large number of resources are expended to treat victims of violent crime while they are warded at the Joseph N. France General Hospital. Most of the victims are young men and calls were made for adults to accept their role as caretakers of the future generation.

“We all have personal responsibilities, so we are all challenged to spend quality time thinking about the crime situation in our nation and we are all encouraged to formulate ideas and positions for the shaping of such structures, institutions and practices, that would restore the social norms and social order that militate against crime in our nation,” the government minister added.

“Most importantly, however, all fathers are encouraged to scrutinize the role that he undertakes in his family; and must recommit himself as a responsible father, to the task of spending quality time with the family, instituting and reinforcing value systems such as teaching his children to care for others as they would care for themselves.”

A strong message for mothers was also shared.

“And you mothers must cease hiding and condoning deviant behavior as condoning such behavior reinforces [it] and that child who benefits from that parental support for deviance soon graduates to criminal behavior — so stop it; when you see it — stop it; if you don’t see it — look for it and stop it; and you would have contributed to saving a life …”

While admiring the enthusiasm of the marchers, Minister Hamilton emphasized “this gathering demonstrates that crime produces social solidarity. Let us therefore embrace the ideas of all sectors, groups, organizations and people, recognizing that we all have something valuable to contribute to nation building. In that regard, I again urge the organisers to engage all of the church family in this community for a bigger better charge against crime in this community.”

Ministry Of Culture Focuses On Cultural Preservation Through Documentation