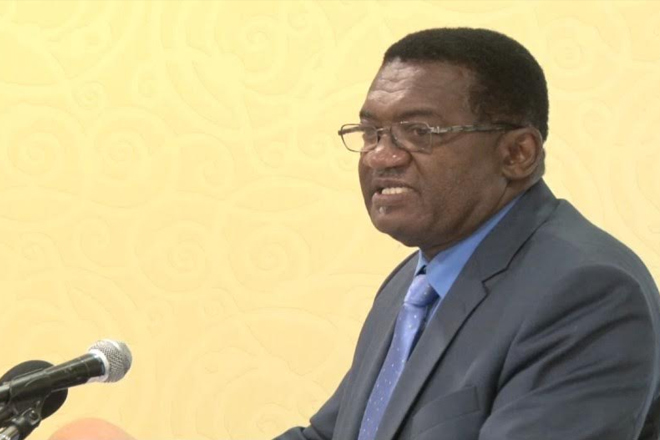 (SKNIS): The Honourable Eugene Hamilton, Minister of Agriculture and Marine Resources underscores the invaluable use of the Fish Aggregating Device (FAD) equipment that has been beneficial to local fishers. The equipment was handed over to the Department of Marine Resources (DMR) and St. Kitts-Nevis FAD Fishers Association by the Ross University School of Veterinary Medicine (RUSVM) on August 03, 2016.

The equipment received included robust GPS Tracking Devices and Solar Powered Strobe Lights to enhance the way the fishermen/women are able to locate and access FADs.

“The use of FADs has led to significant increase in the quantity of large pelagic fish landing in our Federation,” said Minister Hamilton, while delivering remarks at the 17th Ministerial Meeting on the Sustainable Use of Living Marine Resources at the St. Kitts Marriott Resort on Tuesday, September 01. “It has become increasingly important for us to develop the FAD industry and it became so because after global concerns were raised and indeed observed over the effects of climate change, after the data showed on sustainable fishing practices, after evidence of habitat degradation and the import of the invasive species of lion fish, we recognize the importance of developing fishing models and fishing methods so that fishermen could sustain their livelihoods.”

Minister Hamilton said that the above mentioned matters were especially detrimental to the Federation’s reef habitats which served as key fishing grounds for most local fishers, resulting in regular fluctuations in the landings of fish from specified areas.

“In an effort to ensure that the community benefits and that these vital ecosystems [continue to exist] without negatively impacting the livelihoods of our Fisherfolk, the Department of Marine Resources shifted to an ecosystem based approach to fisheries management,” he said, while noting that the approach ensures the sustainability of the fishing industry in the Federation. “In order to support that approach, on August 18, the Government declared its first Marine Management Area (MMA), which is defined by a two mile radius of seawater around St. Kitts and Nevis that will be managed by the Department of Marine Resources in accordance with the Fisheries, Aquaculture and Marine Resources Act, 2016.”

The Marine Resources Minister said that St. Kitts and Nevis’ MMA was proposed since the late 1980’s, but substantial work was completed in 2010, in the 2010 Marine Zoning Plan, after extensive multi-sectoral consultations were done to define the marine areas to be managed. He further stated that the fisheries legislation at that time was inadequate to sufficiently manage the St. Kitts and Nevis MMA.

“In light of the challenges, consultations continued in an effort to raise stakeholder awareness about St. Kitts and Nevis Marine Management Area,” said Minister Hamilton. “With the newly passed Fisheries, Aquaculture and Marine Resources Act, the DMA now has the authority and the capacity through legislation that supports the proper management on governance of such areas.”

Minister Hamilton spoke to the yellow card the Federation received from the European Union (EU) in 2014, when they claimed that St. Kitts and Nevis was classified as a non-cooperating third country. He added that this action came in response to the Federation’s registration of fishing fleet operating off the West African Coast and in the North-Eastern Atlantic fisheries region.

He stated that since the yellow card, the Government of St. Kitts and Nevis has followed an action plan provided by the EU. Minister Hamilton added that one of the very first things that was done following the action plan was to create new fisheries legislation. He said that the Government continues to develop a high seas fleet policy and to monitor the control and surveillance system plan adhering to the requirements of the EU.