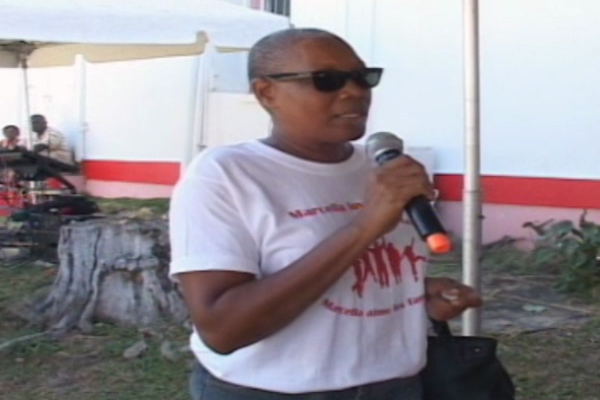 During the official opening of her campaign office last Saturday, Minister Liburd awarded Janos Bagnall and Keeshan “Banker” Millard on their success during Sugar Mas 43.

She started by commending Mr. Bagnall for being crowned the 2014/15 TDC Groovy Soca Monarch.

She said, “Bagnall, as you know, really took over in the Soca Monarch for Christmas. He was the winner of the groovy segment and I think he placed second runner-up in the Power segment. But Bagnall is from my personal area which is Market Street where I grew up and so I want him to know that he has my personal support and as the Parliamentary Representative for the area. He also has my support and so very early, we are sounding a warning that this year at the Soca Monarch, Bagnall taking all.”

In response, Mr. Bagnall thanked the minister for her support and said he takes her challenge of winning both soca categories seriously.

“Banker took everything…very colourful troupe. An extremely talented young man and we in Central Basseterre and the McKnight community indeed we are very proud of Banker and he has done this consistently. This is not just a one off thing. He consistently produces, year after year, the Best Carnival Troupes ever. Extremely talented and we just want to show him our appreciation by giving him this very small token of our appreciation,” she said.

Millard also thanked the minister for her contribution and he promised that he had better things in store in the future.

Banker’s Sweet Sizzling Summer was named the Most Colourful Troupe and the Most Creative Troupe.