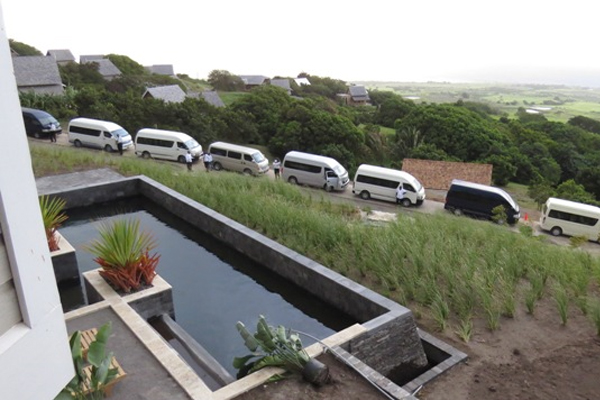 Basseterre, St. Kitts (CUOPM) – The construction of US$300 million Kittitian Hill in the northwestern area of St. Kitts has had significant economic impact on the twin-island federation.

He said the economic impact of the multi-million dollar Kittitian Hill project has already been impressive.

“So far it has provided jobs to more than 500 local construction workers and I am told that it has to-date paid some75 local contractors and suppliers more than 81 million EC Dollars. And the process of recruiting 300 staff by this coming December has already begun. If all continues to go well, the hotel plant will consist of 174 rooms by the end of 2014, and will double in size to 346 rooms with a total of 500 employees by December 2015, one year later. The implications for local and international business spin-offs are tremendous,” Minister Skerritt told the soft opening ceremony, attended by St. Kitts and Nevis’ Prime Minister the Rt. Hon. Dr. Denzil L. Douglas, Deputy Prime Minister the Hon. Dr. Earl Asim Martin, Speaker of the National Assembly, the Hon. Curtis Martin, owners and scores of public and private sector officials.

Speaking of the direct and indirect benefits created by Kittitian Hill to date, Minister Skerritt said the project mirrors the St. Kitts-Nevis Labour Government’s strategic vision for the growth of the tourism product in St. Kitts.

“It was our market research results 8 years ago which first led to our policy decision to shift the balance towards targeting the upscale market, away from the ‘mass’ market, and going after the more affluent and discerning stay-over destination traveller. Faced with a mostly old and tired privately owned hotel plant, our product strategy shifted to focus on the wider destination experience and those existing and emerging developments that focused on the genuine hospitality of our people, along with the unique combination of our natural island environment and our rich heritage, which are the attributes that distinguish the tourism product of St. Kitts from any other,” said Minister Skerritt.

He opined that the discerning traveller of the baby boomer generation, who is still the primary demographic target market for tourists, has frequently cited history, environmental stewardship and sustainability along with the ability to experience another culture as key factors in deciding where to go on their next trip.

“However, Generation X and Millennials, who while not our primary target audience, also value unique experiences of culture, heritage and adventure. Generation X and Millenials are more likely to have short vacations after a business trip; known as “workcations;” which are becoming more important for St. Kitts as we are now seeing a growth in arrivals of corporate executives and professionals,” said Minister Skerritt.

He disclosed that the results of various market related surveys have verified that St. Kitts is on the right track as far as the market targeting is concerned.

“In fact, the results of our most recent exit survey conducted at Robert L. Bradshaw International Airport, in April of this year, indicate that we are succeeding in attracting more upscale travellers. Our survey tells us that the average household income of our visitors is US$146,500.In fact, 64% of all visitors have an average household income of more than US$100,000 and 30% have an average household income of more than US$200,000. Visitors are staying for an average of 7 days – a full week – and their average per person per day spend into our local economy is US$179, an amount which has doubled since I was appointed as Tourism Minister nine years ago. In other words, today it takes half as many visitors to spend the same money in our economy that was being spent 10 years ago,” Minister Skerritt told invited guests.

He also disclosed that exit surveys also show that visitors are leaving the St. Kitts destination having had an overall positive experience.

“They rated their satisfaction with their overall visit at 4.46 out of a possible 5 points. 73% responded that they are likely or extremely likely to make a future trip here, and an impressive 93% would recommend St. Kitts to a friend. Overall, St. Kitts has much to be proud of as our tourism has been on an enviable upward trajectory that is solidly establishing our island among the finest world-class tourism destinations globally,” said Minister Skerritt.

Minister Skerritt, who is also Minister of International Trade, Industry and Consumer Affairs, described Kittitian Hill as the “model for sustainability in Caribbean resort development.”

“It exemplifies the positive impact that tourism can have on the surrounding community and environment. Its unique philosophy is anchored in a broader view of sustainability that extends beyond the environment to also encompass arts and culture, social accountability, and economic development. With a strong commitment to agro-tourism, its 400-acre fertile farmland allows for impactful levels of integration between tourism and food production,” said Minister Skerritt.

He pointed out that in addition to employment opportunities on the farm itself, Kittitians can therefore look forward to increased local food production which should positively impact the overall food supply of the St. Kitts destination.