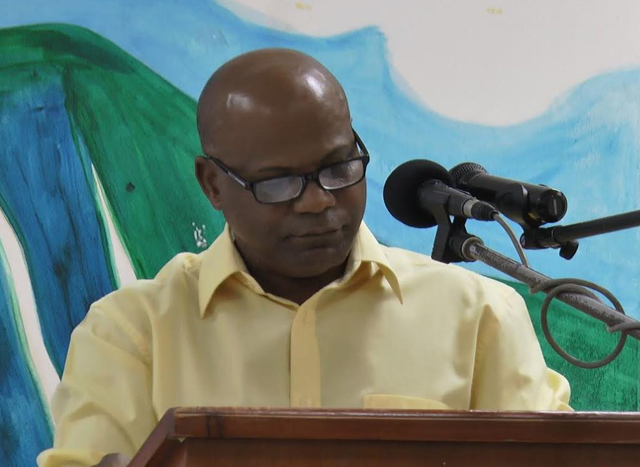 (SKNIS): The Ministry of Trade has embarked on several initiatives to ensure the protection of the consumer and the upliftment of entrepreneurs, says the Department’s Minister, Honourable Lindsay Grant, speaking at the August 11, 2016, “Discussions for Prosperity” town hall meeting.

The minister added that there are various programmes airing about consumer issues as they are important not only to the government but to its citizens.

“We have “Consumer Corner” which is aired every week,” said the minister, adding that persons need to listen to know if there are price changes. He urged persons to visit various supermarkets to find out the best deals they can get. “We are making sure, as visual and efficient as we may have it, that there is no price gouging.”

Minister Grant said that there is now direct access to all the shipping documents through the ASYCUDAWorld Programme. He explained that the prices of the goods the businesses are purchasing at are now known. “We know the kind of mark-up that they should have on the goods. So, we are making sure that the prices are at the level that they should be.”

Minister Grant said that one of the first initiatives of the Government of National Unity was that Value Added Tax (VAT) was removed from food, medicine and funeral expenses.

“That is what this government did, saved you 0.17c on every $1,” said the Minister of Trade. “That was our promise because we wanted to make sure that your lives were better off.”

Minister Grant stated that the government wants to see more entrepreneurs and small and medium businesses.

“[This is because] you have told us and you have come to us and said you want a piece of the pie in St. Kitts,” said the minister, while addressing the audience. “We want to make sure and we want to make it easy and better for you to get a bigger piece of the pie rather than you feel that people coming from such places like Canada, North America, England and Asia are getting a bigger slice of the pie. We are putting you in a position so that you can get an equal piece of the pie or even bigger.”

He added that, that is why the Ministry of Trade has given out concessions to over 100 businesses.

“Hundreds of thousands of dollars back in people’s pockets,” said the minister. “We gave them concessions to start small businesses. Concessions on tools, equipment, vehicles and the like. We believe that the small businesses are like small engines of growth in the economy and we make sure we build our people up.”

The trade minister said that his ministry is also helping with business proposals, which persons need to take to the bank to apply for a loan. Minster Grant mentioned the Fresh Start Programme set up at the Eastern Caribbean Development Bank, which contained $13 million that helped a number of persons who wanted to start businesses, as one of the ways the government stepped in to help entrepreneurs.