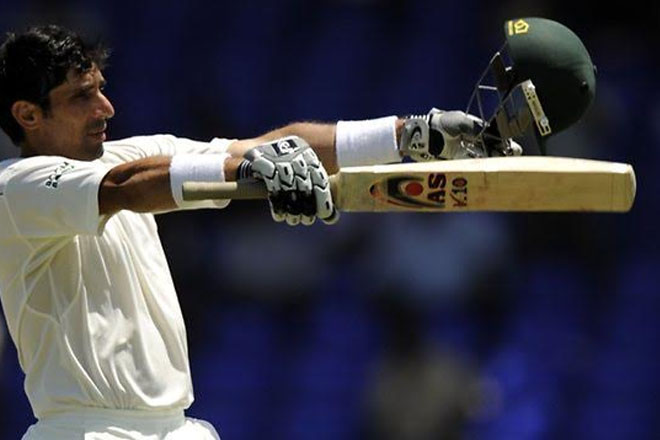 (ESPN Cricinfo) – Pakistan had left Abu Dhabi with their batting momentarily in disarray, but as the Test series moved on to Dubai, Misbah-ul-Haq looked matters up and down and took the chance to restore a sense of gravitas. England bowled with heart and consistency on a surface that was a test of their stoicism, just as Abu Dhabi had been before, but Misbah ensured their rewards were limited on the opening day with a century of great nous and deliberation.

He could not have reached that hundred in a more maverick manner. For the last half an hour or so, he had blocked mechanically for the close, his only aim to prevent calamity against the second new ball, and was still 13 runs short of his personal target by the time Moeen Ali bowled the final over.

When he swung the first ball for six into the empty terraces at deep square, it felt like a show of defiance. When the third was planted over long-on, a warm-down routine had begun in earnest. A frisky reverse sweep provided the final single and a hundred only he can have envisaged.

He has now equalled Inzamam-ul-Haq’s record of seven hundreds as Pakistan captain – two energy-preserving batsmen who could teach VW a thing or two about low emissions.

Misbah proceeded with stiff stolidity, a headmasterly batsman able to bring discipline to proceedings with a single expression. One imagines he would teach Latin – and be demanding when it came to declensions. At the back of the class, where knots of supporters were battered by the heat, concentration was sometimes lacking.

Conditions were in his favour but at least this was a cricket pitch, unlike the monstrosity in Abu Dhabi. That one was surely marked as poor, not that Andy Pycroft, the match referee and an ICC apparatchik, has had any intention of saying.

Misbah does not hook these days, and ducking was not always an option. As a result, he took the occasional blow on the body, as well as being struck on the helmet by Mark Wood, who disturbed him more than anybody. An imposing figure, he weathered the assault patiently, aware that the surface was loaded in his favour. England took the second new ball, but a late success did not materialise.

Twice Misbah mistimed attacking shots against Adil Rashid and was fortunate to evade a fielder, and even he broke his bat handle when running it into the crease amid vague concerns of a run out. At times of crisis, he allows himself a smile of defiance, but such crises occurred irregularly and for the most part he was impervious to anything that life might throw at him.

As Misbah walked solemnly to the wicket at 85 for 3, with the afternoon session only one ball old, England would have hoped for something better. To have three wickets already banked was a merciful release for an attack whose suspicions that they would again be living on scraps were well founded.

It was a hot and airless day, flags hanging limply, and an eerily empty stadium echoing to England’s shouts of encouragement as they tried to push Pakistan’s first-innings score in Abu Dhabi – 523 for 8 declared – to the back of their mind. There was a little more pace and bounce on offer than in the opening Test, although it was all relative, and there was also a hint of first-session turn, especially when Moeen’s offspin took the wicket of Mohammad Hafeez.

That breakthrough came in the first over after drinks, Hafeez, who had kept short leg interested on several previous occasions, deflecting gently to Jonny Bairstow via an inside edge as he pushed forward, the first of two short-leg catches.

Ben Stokes had looked peaky after a pre-match net session, the sun already beating down on his wan complexion and even his tattoos looking a little more washed out than normal, but England had enough faith in his resolve to be confident his stomach bug would not overly affect him.

Stokes soon had something to hearten him – a wicket with his fourth ball. If Bairstow’s first catch was a gimme, the one that accounted for Shoaib Malik was something special, demonstrating an unyielding mind as the ball rapped him flush in the chest and then a spring to his left to hold a rebound with such alacrity that he made it look part of the plan.

Although Shan Masood passed 50 for the third time in Tests, when he nicked the first ball of the afternoon session to the wicketkeeper it meant that James Anderson had dismissed him three times in the series in only 13 deliveries. For a fast bowler to have a bunny is never more gratefully received than in the arid conditions of the UAE.

Masood was a more secure figure than the unsettled batsman seen in the opening Test in Abu Dhabi, without entirely dispelling England’s notion that he is vulnerable against the short ball. A controlled pull against Wood was his best retort, and he showed a striking enthusiasm for using his feet against Moeen, dancing down the pitch to loft him straight for six and then stroke him to the cover boundary.

His decision to review his dismissal made no sense as an umpire not armed with Hot Spot or Snicko hardly had the tools to overturn the decision. In any case, Ultra Edge – the flavour of the month, and being used by Sky Sports – showed an edge.

With Stokes’ health potentially compromised, not that he showed it, and Wood’s ability to withstand back-to-back Tests always in question because of his persistent ankle trouble, Moeen sought with limited success to fulfil a holding role, so allowing the seamers to bowl in short spells. The legspin of Rashid was used lightly: his time, England will calculate, will come later in the match.

Younis Khan and Misbah in unison is a familiar sight and the afternoon belonged to them, their stand worth 93 runs in 29 overs as they picked off opportunities with consummate ease. Stokes was England’s most unfortunate bowler as he passed the outside edge more times than he had reason to expect. When Misbah did edge, the ball trundled between first and second slip, reminding the bowler of a slow surface and Joe Root’s stiff back – a condition that might again restrict his potential use later in the match as England’s third spinner.

Younis was the slightly more venturesome of the two old stagers, but England again struck early in a session, three overs having elapsed after tea when Younis was caught down the leg side, a decisive push at a ball from Wood as he sprung catlike across his stumps and a walk from the crease before the umpire could raise his finger, frustrated that he had fallen when well set.

That Pakistan’s batsmen did add useful runs in the final throes of the day owed much to a willingness to attack Rashid, who bowled with more confidence than he had in the first innings at Abu Dhabi but still disappeared at five an over. When Rashid was withdrawn, Misbah decided to block for the morrow. Or so it seemed.