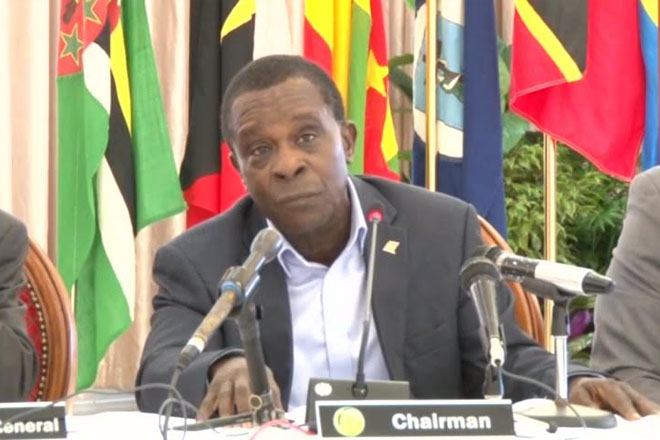 (ZIZ News) — Grenada’s Prime Minister Dr. Keith Mitchell, on Thursday, slammed President of the West Indies Cricket Board, Dave Cameron, for what he called an “amazing level of disrespect”, as pressure continued to mount on the board to meet urgently with CARICOM leaders over the Governance Review Panel Report.

“The report has now been presented and as heads we are extremely busy with activities at our doors every single minute of each day in our individual countries. But recognising the value and importance of cricket and sports to the region as a whole and to our people we have decided that we will sacrifice the time that we did not even have to ensure that we can move forward, get West Indies Cricket back to a point where we can start going up the ladder once again,” he said.

Mitchell, the Chairman of CARICOM’s Cricket Governance Committee, was at the time addressing regional media officials at the closing of the 62nd Meeting of the OECS Authority.

Cameron has been adamant about the WICB’s inability to accommodate the Caribbean leaders prior to the already scheduled meeting and reiterated this position in written communication to CARICOM Secretary-General Irwin Larocque, on Tuesday.

Prime Minister Mitchell urged President Cameron to rethink his decision not to accommodate a meeting before their Board of Directors meeting on December 12 in St Lucia.

“It is quite amazing…the level of disrespect. The level of lack of understanding of the importance of this is quite frightening and I don’t think I should hold back any words. I expect the President of the West Indies Cricket Board to respect the leadership of the Caribbean, the leadership of people of the region and to give effect to an urgent meeting,” he said.

“We expect no less and I hope and pray what we saw was a rush of blood and not his real intention. So I expect to see a meeting very, very soon between the leadership and we are waiting for that answer to meet quickly to move cricket forward in the region,” he said.

The panel had as its main recommendation the “immediate dissolution of the West Indies Cricket Board and the appointment of an interim board whose structure and composition would be radically different from the now proven, obsolete governance framework.”