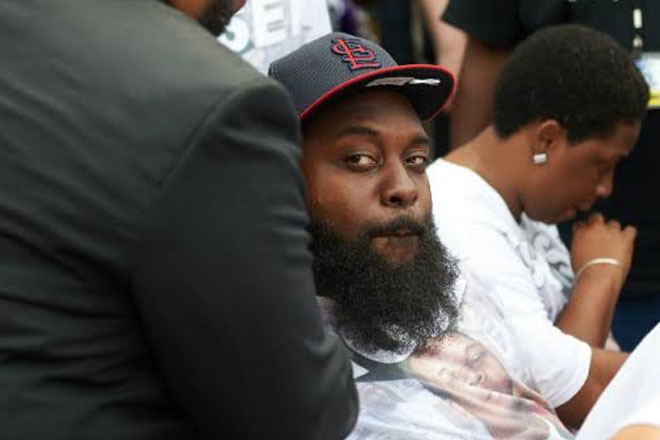 Moments of silence one year after Ferguson police shooting

Ferguson, United States (AFP) — Several hundred demonstrators stood in silence Sunday at the spot where an unarmed black teen was shot dead by a white police officer one year ago, once again shining the spotlight on America’s troubled race relations.

Two white doves were released over the crowd that gathered to mark the anniversary of 18-year-old Michael Brown’s death in a fateful encounter on August 9, 2014 with officer Darren Wilson.

The crowd, about 300 strong, observed four and a half minutes of silence — one minute for each of the four and a half hours that Brown’s body lay face down in the street before being taken away.

The killing in Ferguson, Missouri — a suburb of St. Louis — set off a summer of protests and intense scrutiny of heavy-handed police tactics in a series of cases that ended in the deaths of unarmed young blacks.

Yet another high-profile shooting occurred Friday, when a Texas police officer fatally shot 19-year-old unarmed college football player Christian Taylor after he drove his vehicle through the front of a car dealership.

Many in the crowd in Ferguson wore T-shirts emblazoned with Brown’s portrait and the word “Choose Change.” Others carried signs, including one that read: “STOP killing black children.”

They then set off in a silent march through Ferguson to the Greater St. Mark’s Church, which served as a sanctuary during the protests that followed Brown’s death.

One year on, black leaders say they have witnessed a dramatic change in American attitudes toward race but see little action by lawmakers to enact reforms in policing.

The head of the National Association for the Advancement of Colored People, one of the country’s oldest civil rights group, called the pace of legislative change “glacial.”

He urged passage of laws against racial profiling by police and support for reforms requiring body cameras, independent prosecutors and retraining of US police departments.

President Barack Obama meanwhile dismissed criticism that he had been too reluctant to tackle issues of race early in his tenure as America’s first African-American president.

“Here’s one thing I will say: That I feel a great urgency to get as much done as possible,” he said in an interview with NPR, parts of which were released Sunday.

“And, there’s no doubt that after over six and a half years on this job, I probably have an easier time juggling a lot of different issues. And, it may be that my passions show a little bit more. Just because I have been around this track for now for a while.”

Outrage over the deaths of Brown and a series of other black Americans at the hands of police in the past year has been channeled into a sustained nationwide movement with the social media hashtag #Blacklivesmatter becoming its rallying cry across the country.

On Saturday, protesters in Ferguson marched along one of the avenues hit by fierce rioting last November when a court decided not to indict Wilson.

The peaceful march, led by Brown’s father, saw participants shout slogans such as “Hands up, don’t shoot” and “We do this for who? We do this for Mike Brown.”

Protesters grew more confrontational later, when around 200 people gathered outside the police headquarters chanting: “Hey hey, ho ho, these killer cops have got to go!”

Several protesters jumped over a barricade around the building and faced off with police officers, although the crowd eventually dispersed without violence.

At the earlier march, which ended at Brown’s Normandy High School, his father — also called Michael — told reporters he was working hard at “keeping my son’s life still around” and doing “whatever I can do to empower us as a people”.

Asked what has changed over the past year, he said: “Nothing, for me. Some families got justice through Michael Brown’s legacy, and that helped them. But I’m still trying to get through.”