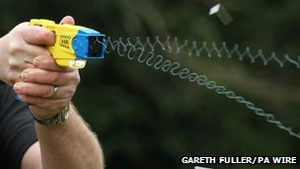 (BBC) A Montreal man has died following an altercation with police in which officers fired an electric stun gun at him, Canadian media report.

The man was pronounced dead at a local hospital on Monday night after the confrontation with police responding to a reported drug overdose.

The man, said to be in his 50s, fought the officers, who used a stun gun to subdue him, police said.

Police said several officers were injured in the confrontation.

Montreal police were called to a rooming house on Monday evening after a woman fell unconscious, the Montreal Gazette reported.

A man there subsequently struck a police officer in the face, reportedly breaking at least one tooth.

The man initially refused to be transported to hospital but later lost consciousness.

The suspect was taken to hospital and listed in critical condition before being pronounced dead.

A woman believed to be involved in the matter was also treated for a drug overdose in hospital.

Quebec provincial police have opened an investigation into the matter.