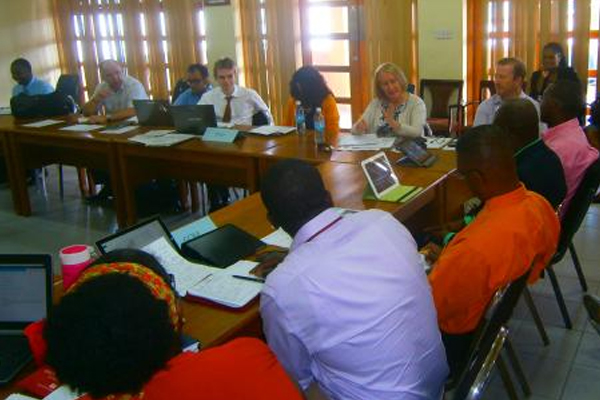 Brades, Montserrat (GIU) — Talks are continuing this week between the government of Montserrat and officials of the UK Department for International Development (DfID) on Montserrat’s 2015-2016 Recurrent Budget and related issues.

The meetings, which end on Friday, are reviewing DfID’s budget aid support to Montserrat, especially for the planning of the 2015-2016 government budget, and is also assessing the performance of the existing UK-funded projects there.

The 2015-2016 Montserrat budget is due to be presented in March in the Montserrat Legislative Assembly by premier and finance minister, Donaldson Romeo. It will be his first budget following his People’s Democratic Movement’s electoral victory last September.

Romeo said he is seeking an increase in funding to meet some of the challenges his people and government face, as the small British territory continues rebuilding in the wake of a series of eruptions by its Soufriere Hills volcano between 1995 and 2012.

Its eruptions have in the past rendered more than half of Montserrat uninhabitable, destroyed the capital city, Plymouth, and caused widespread evacuations.

Activity at the volcano has subsided considerably in the last few years.

In remarks to the DfID delegation underlining his argument for more British support to kickstart the island’s economy, Romeo quoted a report by UK’s International Development Committee’s (IDC) official report that stated:

“We do not believe that the reasonable assistance needs of the Dependent Territories should be a first call on the development programme.

“That should be recognised in the structure of administration and funding.”

Romeo agreed that to date “a lot has been done with British support”, but argued that “the key things are yet to be implemented.”

He has listed: “We do not have a proper port with a safe harbour, which was promised 17 years ago. We still use a former village school as a temporary hospital that is inadequate.”

The Montserrat leader of government also said, “After 20 years there are still hundreds of evacuees waiting on hurricane and earthquake resistant housing.

“There are still evacuees living in houses without indoor running water and toilets. Not to mention hundreds in involuntary exile overseas with over 6,000 in Britain alone.

“Each year more and more evacuees living overseas express the desire to return to Montserrat to live and work but cannot for lack of housing and jobs.”

Official figures put the UK government’s volcano-related aid expenditure on Montserrat over the past 20 years at around 400 million British pounds – about 1.6 billion Eastern Caribbean dollars at current rates.