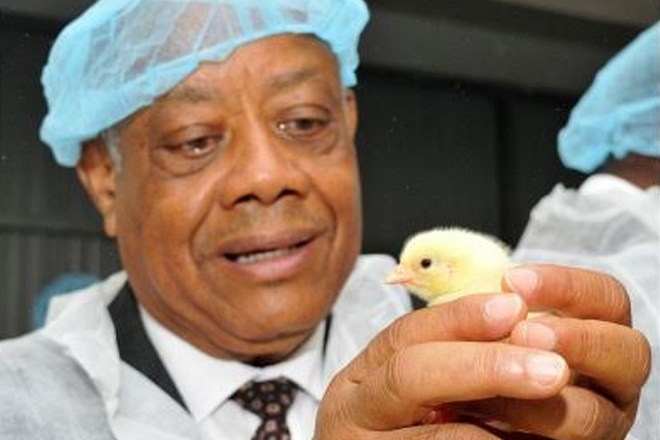 (Jamaica Observer) Agriculture Minister Derrick Kellier has signed off on an import licence agreement for four containers of leg quarters to be shipped into the island over the next five weeks, as part of strategies to minimise the chicken shortage on the local market.

It means that the local market will be supplied with an additional 244,000 pounds of chicken leg quarters to meet increased demand, following the lifting of restrictions on poultry and poultry products from some parts of North America. A ban was implemented last March in the wake of an outbreak of bird flu in the United States.

Kellier, who was guest speaker at the official opening of the Jamaica Broilers (JB) Cumberland Hatchery, stated that the ministry has also cemented an agreement with the JB Group for the production of an additional 50,000 chickens per week, to come into market by the end of February. Talks are also underway to have Caribbean Broilers increase production to meet a similar target to have the chicken shortage addressed.

“Following our consultation with our industry partners and stakeholders we decided on some immediate measures to address the situation. Some of these are short-term responses. In the meantime, we are also happy to note and welcome the swift action by Jamaica Broilers, its supply farmers and other stakeholders to respond to the expanded and growing demand for chicken,” Kellier stated, adding that the Ministry will also monitor demand continually to ensure production levels match demand going forward.

“We take note that this continued growth in demand is in addition to the reported increased production of some 17 per cent in chicken meat last year.”

Recently, there have been outcries from consumers and wholesalers for inadequate supplies of chicken and being forced to pay increased prices. Kellier noted that while he regrets the temporary shortage, it is being welcomed as an indicator of a stronger and growing economy.

“And indeed we welcome the increased demand as a pull factor that will spur even greater investment and greater production in the poultry industry,” he added.

Yesterday, chairman of the JB Group, Robert Levy officially commissioned the operation of the Cumberland Hatchery, following an investment of $14 million to bring the formerly non-productive facility up to company standard. JB has also committed another $12 million annually for maintenance of the hatchery.

“This hatchery will produce nearly 200,000 baby chicks per week which translates to nearly 1 million pounds of poultry meat every week and that also represents a 20 per cent jump in the total island production of chicken meat weekly,” JB vice-president of Feeds and Agricultural Supplies, Conley Salmon told the Jamaica Observer.

“That will go a long way in bridging any shortages that we have,” he added. Local poultry meat production is anticipated to increase by roughly 17 per cent at the end of January, following another increase of 20 per cent by the end of February.

The JB Group agriculture business today spans three countries – Jamaica, the United States and Haiti. The Group plans on investing US$2.5 million in its operations in the third and fourth quarters of this year, and has also announced plans to spend some $700 million in establishing more poultry houses in the first and second quarter led by a 20 per cent growth in small farmers to total 20,000 farmers.