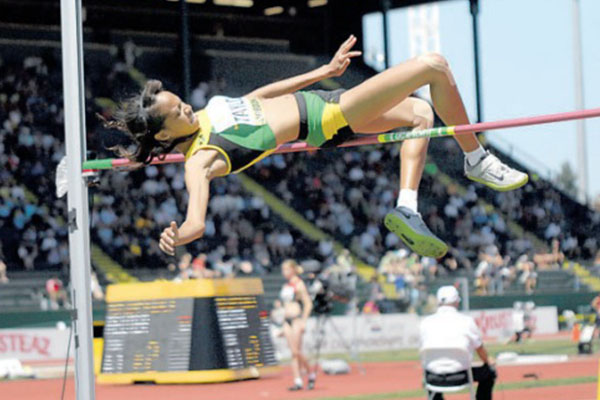 Oregon — Jamaica is expected to add to its medal tally today, the penultimate day of the six-day 15th IAAF World Junior Championships at Hayward Field.

Tyler Mason’s silver medal in a new national junior record 13.06 seconds in the men’s 110m hurdles on Thursday afternoon breathed new life into the campaign and with five Jamaicans in four finals late yesterday, the expectations were for more medals.

Jaheel Hyde in the 400m hurdles was the biggest hope, while Michael O’Hara and Natalliah Whyte were down to run in the men’s and women’s 200m finals, respectively, and Christoff Bryan and Clayton Brown had advanced to the final of the men’s high jump.

The first round of both sprint relays were yesterday evening as well with the final set for today’s lone session.

Taylor cleared a personal best 1.82m to advance to tomorrow’s final, while Thompson and Gordon were both fourth in their respective first-round heats and advanced to today’s semi-finals.

Taylor is attempting to be the first Jamaican medallist in the event at the World Juniors, but it will be a hard task as she failed to clear the automatic qualifying mark of 1.85m yesterday.

Kevon Robinson’s 1 minute 51.89 seconds was not good enough to see him make any progress in the men’s 800m event.

Glenford Watson threw a personal best 56.30m on his first attempt in the men’s discus, but finished 16th overall and failed to advance to the final.

He also threw 54.89m and a foul to become seventh in his group.

Women’s shot putters Gleneve Grange and Rochelle Frazer also failed to advance from the first round. Grange finished with a best of 13.95m for 22nd place overall, two places better than her teammate who had a best throw of 13.78m.

Men’s triple jumpers Clayton Brown and Odaine Lewis appeared to be struggling with leg injuries and performed below expectations.

Brown, who had qualified for the final of the high jump yesterday, looked to be favouring a sore ankle and made just one legal jump, landing at 15.37m, fouled his second jump then passed up on his final jump.

Lewis, the Carifta Games and Central American and Caribbean Junior champion, aggravated an old ankle injury on his first jump and could only manage 15.01m in the second round.