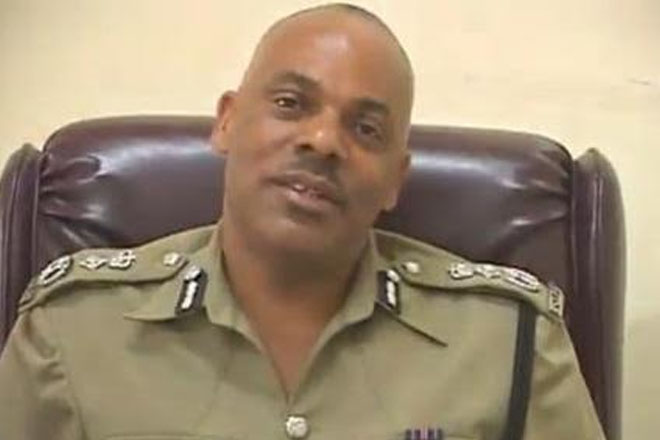 Castries, St Lucia — Commissioner of the Royal St Lucia Police Force, Vernon Francois, who was expected to return to work on June 30, has been instructed to remain on leave for another 30 days.

Almost two years ago, on August 12, 2013, Caribbean News Nowpublished a report that, according to local sources, Francois had been requested to take accumulated vacation leave totalling some 400 days following an incident when he was not permitted to board a flight from Hewanorra International Airport in Saint Lucia to the United States to participate in US organized and financed training programmes.

The report prompted a flurry of official denials, culminating in press release entitled “False Statements” from the Office of the Prime Minister.

Recent developments give reason to revisit the crystal ball of the “False Statements” claim, along with a report by the Caribbean Community Implementation Agency for Crime and Security (CARICOM IMPACS) that is having serious repercussions.

The US State Department’s 2014 human rights report on Saint Lucia has once again highlighted concerns surrounding the police, the penal and justice system that resulted in the suspension of all financial and technical assistance by the US to the Royal Saint Lucia Police Force (RSLPF).

During Operation Restore Confidence (ORC) 2010 and 2011, 12 persons were killed during encounters with officers of the RSLPF in response to an unprecedented wave of homicides and violent crime on the island. Five of the 12 men shot dead were killed in a single operation in Vieux Fort.

In 2012, local inquests concluded that six of the shootings were justified but the US indicated that it did not have confidence in the outcomes of the hearings, while relatives of the victims have insisted they were murdered. The Saint Lucia government enlisted the services of eight investigators from the Jamaican Constabulary Force (JCF) through IMPACS to investigate the police killings.

Sanctions against Saint Lucia took a variety of forms, including travel bans, asset freezes, arms embargoes, capital restraints, foreign aid reductions, trade restrictions, and general export controls by the application by the US of the so-called Leahy Law.

Earlier reports included the US visa revocation of the former deputy commissioner of police, Moses Charles, who led the special task force during Operation Restore Confidence.

On March 8, 2015, Prime Minister Dr Kenny Anthony delivered a televised address “A Distressing Issue to Confront” based on the findings of the report by the JCF. He called the report “extremely damning” because “it could compromise investigations that were still taking place, and to protect witnesses” and that, “The crime problem in Saintt Lucia is facilitated by corrupt politicians, government officials, business persons and the police officers,” that the force worked from a “black list or death list” of persons deemed criminals and officers staged all shooting-death sites to legitimize their actions.

“The stark reality we confront is that the United States will only lift these sanctions if in their judgment all necessary corrective steps have been taken… the Secretary of State must determine and report to the United States Congress that the government of the affected country, in this case Saint Lucia, is taking effective steps to bring the responsible members of the security forces unit to justice. In effect, if the sanctions are to be removed, we must show proof that we are taking corrective steps to deal with the situation,” Anthony said in his address.

Anthony described the report of the investigators as “extremely damning” and “brings home the extreme gravity of this matter.”

“We cannot continue in a situation where we are viewed as a pariah state by our partners in the fight against crime and lawlessness,” Anthony said.

Prior to Anthony’s address to the nation on the IMPACS report in March, Francois proceeded on 40 days vacation leave and Errol Alexander was appointed acting commissioner of the RSLPF.

Former national security minister Guy Mayers has expressed his displeasure, calling the manner in which the police commissioner is being treated as “disrespect, irresponsible and shoddy treatment” by the government of Saint Lucia.

Former commissioner of police Ausbert Regis says Mayers’ stand is hypocritical and he is not the man to come and talk about that, since he does not have the credibility, having participated in similar or worse disrespect of a police commissioner.

“Remember in 2007, I was sent on leave for over a year and a half and it was leave earned, and John Broughton was put in my place as acting police commissioner,” said Regis,

“Was it right that I was served with a letter of transfer by a corporal on a Saturday evening at the Dennery Fish Festival at minutes to ten in the evening?” he asked.

In an invited comment, Castries Central MP, Richard Frederick, said that the current situation surrounding the RSLPF “shows a lack of respect and undermines the confidence of the police force.”

Frederick continued, “This may just exacerbate the crime situation… I believe the government needs to find a medium of communication between those rival gangs… I am willing to participate, willing to use whatever experience I have gathered over the years… to quell the rivalry.”

So far Anthony has kept the IMPACS report confidential in the midst of 11 homicides in 2015 and extreme violence on the streets of Saint Lucia.