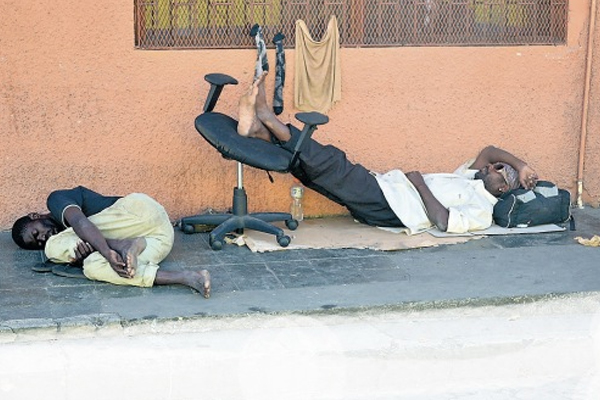 Montego Bay, St James — Concerns have been raised over the increasing number of people living on the streets of the resort town of Montego Bay.

The most recent concerns were raised by Shirley Fray, Administrator Open Heart Charitable Mission, operators of the Care Centre and Refuge of Hope Night Shelter, both in Montego Bay.

Fray said that the numbers are alarming, with an unconfirmedestimate of about 150 people roaming the streets of the town, some committing acts which endanger many lives.

“There is definitely an increase in the numbers. They seem to becoming from all over the island and they are mostly persons with drug addictions, deportees and a few mentally ill,” she told theJamaica Observer West.

She noted that the spike in the homeless people began inbNovember, just before the start of the festive season.

According to statistics provided by Fray, during the month of September last year, Open Heart Charitable Mission served 1,778 breakfast, 2,954 lunch and 630 supper to clients at both facilities. But, the meals served in December last year, showed a significant increase.

Fray believes that the significant increase in the number of meals served, points to the growing number of homeless people roaming the city of Montego Bay.

Nurse administrator at the Committee for the Upliftment of the Mentally Ill Joy Crooks, also believes that there is a spike in the number of homeless people on the streets in Montego Bay.

“From September, October (last year) there is an increase in the number of new people coming out on the streets, and this usually happens when its coming on to the festive season,” Crooks told the Observer West, adding that a lot of them are young persons with drug-related problems.When contacted, Mayor of Montego Bay Glendon Harris could not confirm whether there is infact an increase in the number of homeless people in the resort city.

“I don’t have the facts (but) I won’t contradict it. But what I have been told is that there are more people going to the care centre, not necessarily homeless (persons),” he stressed.

“So there is more demand at the care centre because you have persons who are on hard times going to the centre for meals because they know they can get it. Some people just capitalise on it,” Mayor Harris argued.

And President of the Montego Bay Chamber of Commerce and Industry Nathan Robb said the chamber has no reports of an increase in the number of homeless people in the city.

“We have no reports from our membership of any crisis or worsening of conditions as far as street persons are concerned, so I would need to enquire,” he told the Observer West.

“We have a membership meeting later this week and certainly if it is an issue, then it is something that we would be quite happy to discuss.”

Meanwhile, Crooks believes that it will be very difficult to rid the streets of Montego Bay of the homeless without the setting up of a proper drug rehabilitation facility.

“About 80 per cent of the street people (Montego Bay) have drug-related problems and don’t have any proper rehabilitation facility where they can get help. There is a building that one of the service clubs refurbished, that is in the hands of the Cornwall

Regional Hospital right now. But there are no funds to open it and run it,” she said.

“These persons (homeless) need a restricted environment to be treated in, once you start rehabilitating them. So we need that facility open in order for us to start addressing the problem of street people in Montego Bay,” added Crooks, an experienced psychiatric nurse who has managed CUMI since its 1993 inception.

“Until there is a proper drug rehabilitation facility we are not going to get them off the streets,” she stressed.