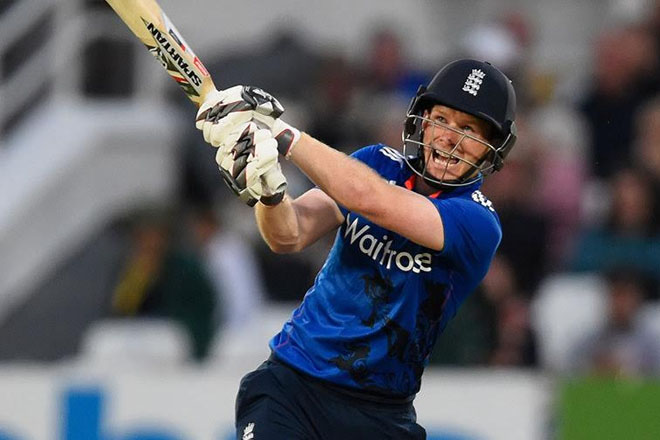 Sports Page — England entered what for them was uncharted territory when they successfully chased a target of 350 against New Zealand in the fourth Royal London ODI at Trent Bridge. It was the fourth-highest chase ever and came in England, which traditionally has not offered up such gifts readily. And they did not just chase it, they marmalised it. A seven-wicket came up with indecent haste with six overs to spare. What is going on?

What Alex Hales and Jason Roy began – Hales the dominant factor in an opening stand of 100 by the 11th over – Eoin Morgan all but completed. “You beauty,” he cried as he smashed Matt Henry into the stands at deep midwicket to complete his eighth ODI hundred. He has four scores of 50-plus in the series; no England captain has achieved that before. England have four scores of 300 on the bounce. Australia have managed six, Sri Lanka five, but this is unheralded for England.

Alongside Joe Root, whose own unbeaten century was almost an afterthought, Morgan assembled a third-wicket stand of 198 in 27 overs, Root possessing finesse, Morgan a captain carrying the fight. For English cricket, this was not just any old century; it was an affirmation, a commitment to audacity that so entirely escaped England in an abject World Cup challenge. Then Morgan looked a captain out of sorts. Now he bats as if truly empowered, his 113 from 82 balls coming to grief with 41 needed when he hooked Tim Southee to fine leg.

New Zealand bowled cannily at Morgan, blocking his strengths square of the wicket, only to find him driving down the ground with rare conviction. A succession of short balls were dispensed with and a lack of proven quality gradually told. Brendon McCullum, New Zealand’s combative captain, has helped to change the face of one-day cricket – his problem is that others are catching on. Nothing stays new for long.

Is it safe? McCullum might have put on a dentist’s coat and adopted the persona of Christian Szell in Marathon Man after New Zealand posted 349 for 7. Nothing is safe, not in this land of inviting batting surfaces and bats with a sweeter tooth than the Honey Monster. It is important then to reflect on the influence of Steven Finn and Mark Wood for England earlier in the day.

Combined figures of 2 for 100 will not attract attention but, in the terms of this contest, they were also decisive.