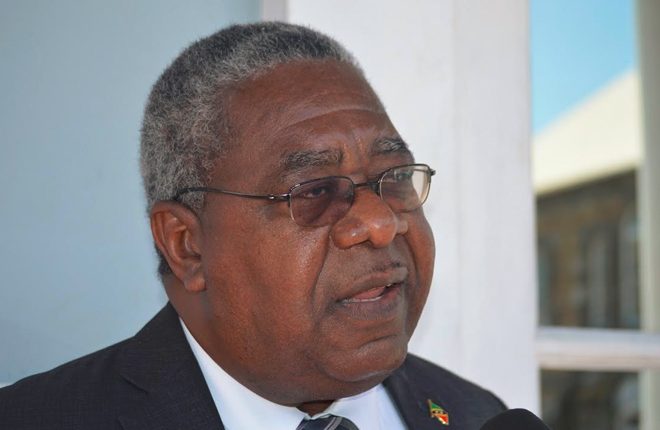 Motion of No Confidence cases heard, written submissions to be filed within 28 days

Her Ladyship the Honourable Pearletta Lanns, a resident High Court Judge for the St. Kitts Circuit of the Eastern Caribbean Supreme Court, presided over the consolidated hearing. The Court heard oral submissions, after which Her Ladyship reserved judgment pending written submissions on yesterday’s hearing to be filed within 28 days.

Mr. Douglas Mendes S.C. of Trinidad was Lead Counsel for the Claimants and Mr. Anthony Astaphan S.C. of Dominica was Counsel for the former Speaker of the National Assembly. The Solicitor General, Mrs. Simone Bullen-Thompson, represented the Attorney General Honourable Vincent Byron Jr.

The two civil cases, which consider the same issues, spring from December 11th, 2012 when the then-Leader of the Opposition, the Honourable Mark Brantley, lodged with the Clerk of the National Assembly a Motion of No Confidence in the Douglas-led administration.

Honourable Brantley and his Team Unity colleagues, who were also at the time members of the Federal Opposition, requested that the Motion of No Confidence be placed on the Order Paper so that it could be debated in the Parliament. Their requests were ignored by then-Speaker of the House, the Honourable Curtis Martin, which resulted in the claimants bringing the Motion of No Confidence cases before the St. Kitts Circuit.

For more than two years, the Motion of No Confidence was never tabled, which deprived the parliamentarians of the opportunity to debate and vote on it in the Federal Parliament.

“It is a matter of great public interest, that is, the question of whether the rights of parliamentarians had been infringed, whether there was a right to table the motion to be heard and have it debated, and therefore to then insist on the Speaker to have it heard,” the Attorney General said.

Section 96 of the Constitution of St. Christopher and Nevis, which deals with the jurisdiction of the High Court, is relevant to the cases, as well as Section 52(6), which states that, “The Governor-General shall remove the Prime Minister from office if a resolution of no confidence in the Government is passed by the National Assembly and the Prime Minister does not within three days either resign from his office or advice [sic] the Governor-General to dissolve Parliament.”

Continuing his explanation of the issues yesterday afternoon, the Attorney General said that, “We have now passed that stage because the Government has changed.”

After referring to the resounding victory at the polls on February 16th, 2015 by the Team Unity three-party coalition, which is led by Prime Minister Dr. the Honourable Timothy Harris, Honourable Vincent Byron Jr. added: “However, it is still of great public interest to determine whether the Constitution had been breached, whether the rights of these individuals [the Claimants] had been breached, and what really should happen when a Motion of No Confidence is filed within the Government.”

Attorney General Honourable Vincent Byron Jr. further stated that Section 52(6) is “a very important mechanism in our Constitution, to ensure that the country runs properly, that in our Westminster system of government we adhere to the rule of law and that we follow the constitutional provisions that make our Constitution and our country a proper, democratic one.”

The Attorney General also said that, “We see this as part of our good governance agenda, to ensure that we establish what the rule of law is in this matter, as we have been doing for the last two years. So we hope that we hear a definitive answer from the court and that it would give guidance as to how these matters should be handled.”

Upon reiterating the Government of National Unity’s commitment to good governance, Honourable Vincent Byron Jr. gave insight into how the court’s decision would inform the administration’s agenda.

“We would then take from that guidance what, if anything, we would have to do maybe to reinforce the constitutional provisions, whether by a statutory instrument under a subsidiary legislation, to ensure timeliness [for instance] if a Motion of No Confidence is passed, what timeframe it should be,” the Attorney General said.

Honourable Vincent Byron Jr. added: “More than anything else, [we would ensure] that it [the guidance from the court] establishes for our country what our constitutional rights should be…and fundamentally establishes further our good governance agenda, how things should happen in our country and the rule of law, which should always take precedence.”