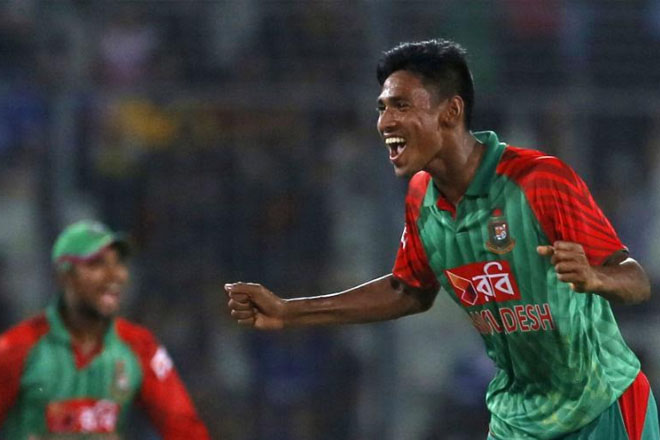 Sports Page — On the tenth anniversary of their famous win over Australia in Cardiff, Bangladesh thumped a full-strength Indian team in front of a raucous Mirpur crowd. Nineteen year-old Mustafizur Rahman keeled over India’s batsmen with an assortment of cutters to become the second Bangladesh bowler after Taskin Ahmed to claim a five-wicket haul on debut.

His performance came after a rapid 102-run opening stand between Tamim Iqbal and Soumya Sarkar had formed the centerpiece of Bangladesh’s 307, their highest against India in ODIs.

The 79-run victory meant Bangladesh needed to win only one out of their next five ODIs to cement their spot in the 2017 Champions Trophy, which will be contested by the top eight ranked ODI sides as of September 30, 2015.

Mustafizur had to leave the field for a while after colliding with MS Dhoni in the middle of the pitch, but the 19-year old fast bowler returned to snuff out India’s chase by dismissing Suresh Raina and R Ashwin off successive balls. He could have become only the second bowler after Fidel Edwards to claim a six-for on ODI debut had he hung on to a return catch off his penultimate delivery. However, he had done enough and finished with outstanding figures of 9.2-1-50-5 in Bangladesh’s ninth straight win at home.