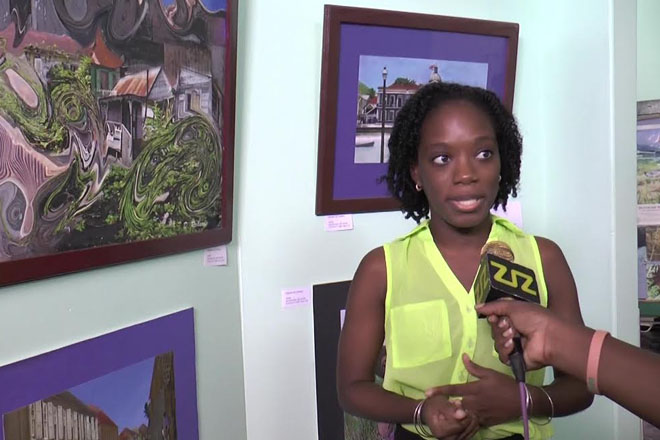 On Friday, our cameras stopped by the museum to get a feel of what art lovers had experienced.

Julius said the feedback from the general public had been positive.

“It’s been quite well. We’ve had some people coming in and out and we’ve had about 15 artists participating and it’s turning out to be good,” she said.

“We’re hoping to have the exhibition to be held every two years because it will really commemorate the artists, the local artists, to show appreciation for their work, and also for C.A. Paul Southwell. He was one of the founders who started the National Arts Exhibition many years ago so we’re trying to bring awareness of him and also the artists here so maybe every two years we’ll have that event,” she added.

The National Arts Exhibition was mounted from September 21st to 25th as the coordinators capitalised on local artists who had participated in a similar exercise the week before.

Julius also shared her hope for the National Art Museum, saying it can facilitate even more aspects of national art.

“The National Art Museum, we want to be able to have a wider arrangement of different artists and their work here but because this is a historical museum we can’t really accommodate all of that work but we would like to have that in the future where we could have a section dedicated only for the artist work and also for the historical artefacts,” she said.

Other activities that formed part of the month-long Independence 32 observance were the State Service of Thanksgiving on Sunday 13th, patriotic programmes in schools on Monday 14th and Thursday 17th, the Prime Minister’s Lecture Series on Tuesday 15th, the National Heroes Day observances on Wednesday 16th and the pay out of gratuities to former workers of the St. Kitts Sugar Manufacturing Corporation on Friday 18th.