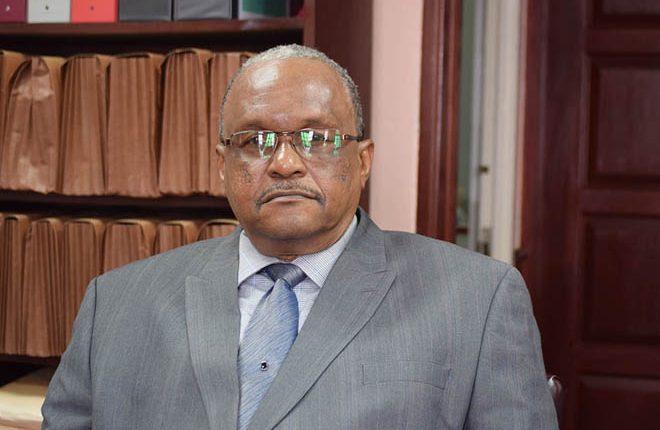 (Press Unit in the Office of the Prime Minister) – The Government of St. Kitts and Nevis is said to have found an “excellent” candidate to fill the post of National Security Advisor in the person of Retired Major General Stewart Saunders, and that commendation is being shared by others locally and regionally.

Prime Minister Dr. the Honourable Timothy Harris told the nation during the last sitting of the National Assembly on Tuesday, July 11, that the retired Major General comes to the post eminently recommended at the regional level and highly qualified.

Prime Minister Harris noted that before Major General Saunders was given the nod to fill the position as National Security Advisor in St. Kitts and Nevis, the local Government sought credible recommendations from former employers and regional bodies.

“We went to the Government [of Jamaica] to find out its views. The Cabinet Secretary of the current administration responded and indicated that we had an excellent find in this gentleman. So he has the support of the incumbent administration. The Chief of Staff of the Jamaica Defence Force gave a sterling recommendation of this gentleman and the University of the West Indies Academic Director, Dr. Hilton McDavid, who is in charge of the Master’s in National Security and Strategic Studies programme, gave him also an excellent recommendation,” Dr. Harris told the National Assembly.

The honourable prime minister also noted that Major General Saunders served under two different administrations in Jamaica. He was appointed Permanent Secretary in the Ministry of National Security in June/July 2013 under the PNP Government. Following a change of administration in February 2016, Mr. Saunders continued as Permanent Secretary up until the end of his contract in July of 2016.

The Government’s decision to appoint Mr. Saunders as the new National Security Advisor has since received strong support at both the national and regional levels.

During a recent airing of the popular radio programme, “Operating Room” on WINN FM 98.9, host Dwyer Astaphan welcomed the decision taken by the Team Unity Government, adding that “from the reports given by the Prime Minister, it seems to me that Major General Saunders is also very aware that solving crime is not just about strict policing but also about social intervention strategies.”

Former National Security Minister Astaphan continued by saying, “The Government of St. Kitts and Nevis inherited a problem – a major problem. They have engaged Major General Saunders to advise on national security [as an] advisor to the Prime Minister. He is qualified. Rather than trying to kill this effort, we should give it a chance.”

“The problem that we have here has been festering and worsening over a period of 20 years. Let’s be brutally frank about it, very little was done about it and I think that with Major General Saunders and the gentleman from Bramshill [Policing Advisors] in England, a fellow called Steve France-Sargeant, we might get the national security side of the equation better positioned now to reduce and control crime,” Mr. Astaphan stated.

Furthermore, in an article headlined “New National Security Adviser ‘Rational And Sensible’” that was published on www.WINNFM.com on Friday, July 14, Major General Saunders was described by retired Rear Admiral Hardley Lewin of Jamaica as “a very competent and professional officer” of the highest integrity.

Rear Admiral Lewin was quoted in that article as saying, “I think that General Saunders will be giving his best advice and bear in mind what an advisor is, an advisor is not a decision maker, an advisor gives advice. Their best, unbiased, professional advice; they don’t make decisions. I think that by availing themselves of the professional knowledge, skills and abilities that General Saunders can bring to the table, availing themselves of that advice, I think will make a significant impact on the matters of crime and security in St. Kitts.”

Major General Saunders brings to the post of National Security Advisor over 40 years of distinguished public service dealing with crime at the operational, strategic and policy levels.

As a military professional, Mr. Saunders achieved his highest rank, Major General, and retired as Chief of Defence Staff of the Jamaica Defence Force in October 2010. He was appointed Senior Consultant/Advisor in National Security matters in 2012 and later, Permanent Secretary in the Ministry of National Security.