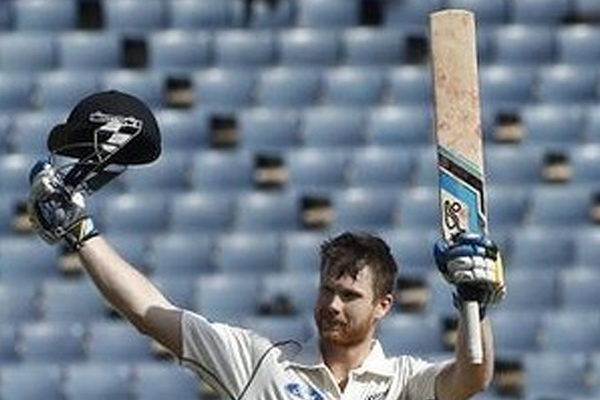 Sports Page — West Indies were one wicket away from having a crack at New Zealand’s tail during the morning session of the second day at Sabina Park. They did not take it for 60.3 overs. The visitors’ last line of recognised batsmen, allrounder Jimmy Neesham and wicketkeeper BJ Watling, took advantage of tiring bowlers and a placid pitch to put on 201 runs for the sixth wicket, and all but erase West Indies’ hopes of winning Chris Gayle’s 100th Test.

Neesham was the first to attempt an aggressive approach on a sluggish surface and his methods made him the eighth batsman to score hundreds in his first two Tests. His partnership with Watling – compiled at 3.32 an over – was the fastest of the match, discounting the flurry from Tim Southee as New Zealand declared on 508 for 7 late in the day. The turnaround in tempo was remarkable, for New Zealand had scored only 59 in the first session for the loss of Kane Williamson, Ross Taylor and Brendon McCullum.

There were shots played after lunch, which was a drastic change from New Zealand’s morning. Watling was strong square of the wicket, cutting and pulling, while Neesham’s preferred region was between long-off and wide long-on. Early in the session, he stepped out and hit Suliemann Benn flat over the fielder at mid-on.

A standout feature of Neesham’s innings was his inclination to use his feet on this slow pitch. He stepped out twice to hit Shane Shillingford over the straight boundary for the innings’ first sixes in the 137th over, and continued advancing against Shillingford and Marlon Samuels, targeting the wide long-on boundary. Neesham passed 50 off 103 balls and then accelerated, getting to 100 off 159.

West Indies’ openers, Gayle and Kieran Powell, had nine overs of flat-out intensity to negotiate from New Zealand’s bowlers. Powell was lucky to survive, when he edged Tim Southee to third slip where Peter Fulton put down a simple catch. Gayle had no such scares, and it is him that most fans will flock to watch on Tuesday, hoping for a memorable innings in his 100th Test.