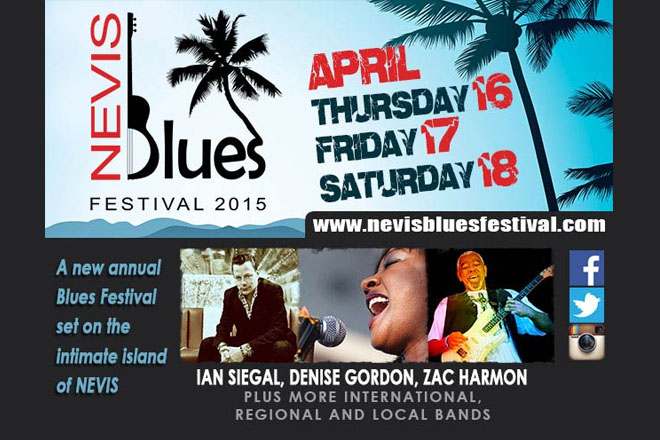 On Monday, Producer Richard Pavitt spoke with the Nevis Island Administration’s Department of Information about the preparations to date. He described his feeling as one of excitement as several names had been added to the line-up.

“We have the lovely Asher Otto added to the programme, great voice, lovely looking girl, she’s got everything a young singer needs in this day and age…she’s bringing her entire band with her which should be great. I have also added to the programme a gentleman called Justin Merrick from Memphis who is a singer but he’s also the Artistic Director of the Memphis-based Stax Music Academy…he’s coming here to sing but he also wants to look at the arts centre and talk about opportunities that maybe to involve Nevis and Nevis youth in the music programme that they have in Memphis and encourage kids to play soul music and get involved in music of black origin basically,” Pavitt said.

While the Nevis Blues Festival is being marketed as an intimate experience, Pavitt says he expects to see a large turnout each night.

“When you do something for the first time and you have no idea what to expect…our view was well let’s fill a small space than half fill a big space because to my mind, atmosphere is everything and we want people in there having a great time. There’s going to be lots of food, bars, you think that’s small but that would comfortably accommodate 800 people so if we get 800 people every night it’s going to be fantastic,” he added.

Pavitt said while many local persons may not be familiar with blues music, it is important to attend the festival because blues music had influenced other genres of music that residents now enjoy.

The Nevis Blues Festival will run from Thursday 16th April until Saturday 18th April with concerts commencing at 7:00 nightly.

Pavitt also said sea transportation was being organised to ensure that residents of St. Kitts are able to experience the festival.