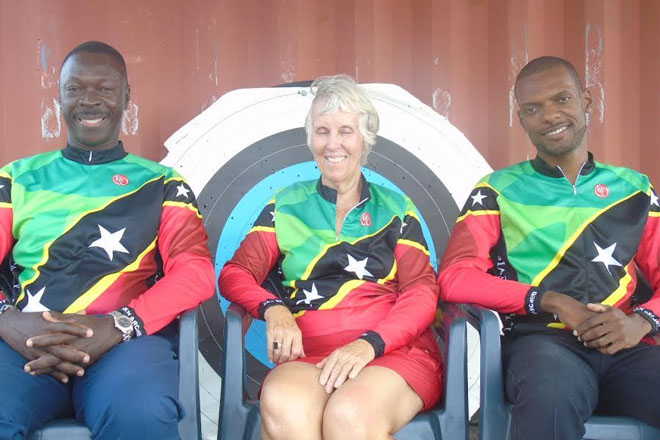 Sports Page — Four Nevisian Archers recently returned to the Federation after participating in a prestigious Archery contest in Trinidad.

The four Archers: Dane Sandiford; Pam Barry; Edmund Blackett and Catherine Joseph, all expressed their delight in being a part of the tournament.

Sandiford indicated that the championship was well attended with five countries participating: Host Trinidad and Tobago; Guadeloupe; St.Kitts and Nevis; Martinique and Barbados.

There were approximately 80 Archers involved with age ranges from 10 to 70 years old.

Guadeloupe won the overall championship for the second time, with Martinique placing second and Trinidad and Tobago, third.

Sandiford noted that for his team, it was a joy competing alongside Archers, some of whom have been competing at this level for over twenty years.

He noted that some of the athletes representing Guadeloupe, also turned out for France and one or two of them would have already competed in the Olympics.

All of the team captains received a plaque and Ms Pam Barry received a trophy for her work in pioneering the sport of Archery in the federation of St. Kitts and Nevis.

In terms of individual performances, Sandiford placed 4th in the masters’ category.

Pam Barry indicated that even though she was probably the worst Archer on show, she at one point outdid one of the Archers who actually won in the field shoot.

Edmund Blackett noted that it was an amazing experience. ‘I actually felt the magnitude of the sport,’ he stated.

He also pointed out that because he had been shooting casually on the local range, he soon discovered that the bow and arrows that he took to the competition were substandard and he was only really equipped to shoot in one event.

He noted that despite his limitations, he still hit a few dead center shots, to the cheers of the crowd.

Catherine Joseph was awarded a medal for her great effort and achievement in the women’s masters’ category.

Going forward, Sandiford indicated that his Association will be formulating plans to attract new members and especially from the younger population. He referred to the passion exhibited by young Archers during the recent tournament as an inspiration.

‘The plan is to implement summer programs for school children,’ he said.

He also pointed out that some critical links were established while in Trinidad and there are some training sessions for local Archers upcoming. One will be coming out of Trinidad, towards the end of the year.

He also stated that the local Archers will shortly commence practice and training sessions with the stated goal of participating in the tournament next year, which will be held in Barbados, where one of the challenges would be to shoot across water from a boat, as part of the competition.

He made an appeal for interested persons to sign up to become a part of the Association.