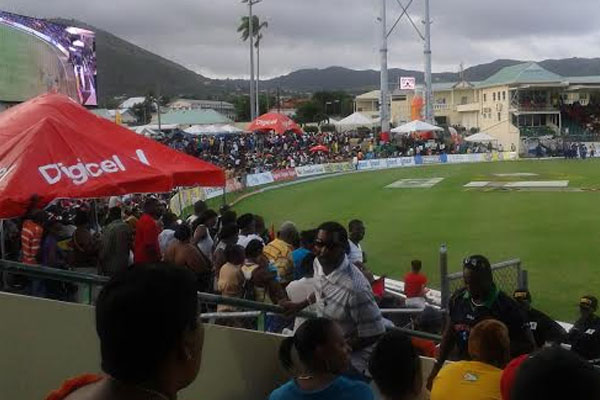 Sports Page — The matches on this leg of the Caribbean Premier League (CPL) are being played at Warner Park in St.Kitts.

As a matter of fact, the St.Kitts administrators have not only locked down some exciting preliminary matches but add to that the Lara/BEEFIE bash; the semifinals and then ultimately, the finals.

But the CPL would not be the CPL if there were no big and hyped up crowds in attendance.

Besides, some Trinidadians had earlier expressed the view, while the matches were being played in Trinidad that they ‘rightfully’ deserve such prestigious matches because only they could provide the kind of crowds and hype required.

However, the people of the federation of St.Kitts and Nevis have put a lie to that theory. Not only have they turned up in astounding numbers but they have also served to provide the added hype and intensity required.

The cultural displays have being nothing short of phenomenal. What with the masquerades; the iron band—make that at least two; the dancers; the Mexican waves—even though often mistimed.

The crowds have been present and they have been thoroughly entertained-even though not all of the time by the Cricket itself.

But the Cricket has provided some super entertainment too. There have been a six hitting fiesta; there have been some fantastic catches and some of the bowlers have shown great commitment as well.

It is also obvious that some of the spectators are there not specifically for the cricket but for the excitement. On Sunday evening after Pollard had slammed another impressive boundary, one female spectator was waving her newly acquired Digicel boundary flag when someone pointed out that she was waving the wrong side.

The Nevisian presence is being felt at the CPL experience. Boat loads of individuals have crossed the waters on all of the match days. The first nigh on Thursday 7th August, the boats did not return to Nevis until after 1am the following morning!

On Saturday and Sunday night some three boats operated but with the matches starting earlier, the folks were back in Nevis sometime after 8pm.

Nevisians are also proud to know that their commentators are also a part of the very exciting mix. The radio commentary team has included one of the Federation’s finest in Stevenson Manners and VON radio’s Sports personnel Gary Pemberton.

Fast developing regional umpire, Carl Tuckett is one of the officials and the St.Lucia Zouks has Coach Stuart Williams in the lineup and Tonito Willet who to the disappointment of his Nevisian fans, batted really low in the order on Sunday night and then did not even get a bowl in their losing cause. His proud parents were also there to witness the game.

However, probably more than half of the din being created at the Warner Park stadium can be heard all the way in Hanley’s Road in Gingerland and as far as Newcastle, because the Nevisians are making their presence felt!