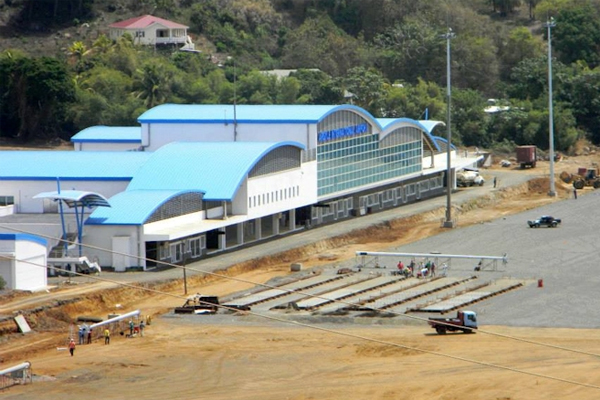 Kingstown, St Vincent — Plans toward making Argyle International Airport in St Vincent a “green” airport will move a step closer this month, when officials of the CARICOM Development Fund (CDF) return to SVG to sign a loan agreement for US$750,000 towards the setting up of a solar photovoltaic system at the new airport.

The system will help reduce electricity costs at Argyle, making it the second airport in the eastern Caribbean region to be solar powered, following the debut of the solar farm at St Kitts’ Robert L. Bradshaw International Airport. Argyle will eventually provide two megawatts of electricity, but in the first phase of development provide 220 kilowatts, partially powering its terminal building.

Lorne McDonnough, CEO of the CARICOM Development Fund (CDF), when speaking about the loan, explained that the project being initiated at the Argyle International Airport is a pilot project to meet the needs of the new airport at peak demand and full operation. It is part of a larger green program for the CDF, which is promoting environmentally friendly energy projects in the region and is striving to establish the plant at Argyle as a flagship for the initiative.

“Our new Argyle International Airport is going to transform the tourism industry, making SVG one of the most sought-after and ‘green’ destinations in the eastern Caribbean,” said Glen Beache, CEO of the St Vincent and the Grenadines Tourism Authority. “In addition, the new airport terminal, which will be partially powered by solar energy, has been carefully sized to accommodate our expected growth in passenger traffic over both the medium and long term.”

Argyle International Airport is the largest development project ever undertaken in SVG and is a critical cog in the evolution of the multifaceted, multi-island destination’s growing hospitality sector. The new airport (which will replace the existing ET Joshua Airport) will offer nonstop international jet service from North American and European gateways.

To-date, the terminal construction is complete; the paving of the runway has been underway and should be completed by approximately mid-June; and the current completion date is July with the airport slated to open at the end of 2015.

Developed by the International Airport Development Company (IADC), a private limited liability company wholly owned by the government of SVG, Argyle’s new terminal building will have three floors with 129,870 square feet of floor space – designed to handle about 1.5 million passengers per year, more than five times the number of passengers currently passing through the existing airport.

The Argyle International Airport will sit on roughly 175 acres of land, with a paved runway 9,000 feet long and 150 feet wide. The airport is designed to accommodate jets as large as Boeing 747-400s. Upon completion, the terminal building will contain a departure lounge, concessions area, rooftop restaurant, a conference center facility with a rooftop garden and vehicle parking.

The project for the new international airport initially broke ground in August 2007 and is a US$240 million investment, the country’s most costly capital project in its history. It is being financed by the SVG government, as well as by grants, donations and loans from a diverse group of countries such as Cuba, Venezuela, Trinidad and Tobago, Mexico, Austria, Malaysia, Turkey, Qatar and Taiwan. The earth and site works for the new airport has involved the removal of three mountains, filling two valleys, creating embankments, and spanning a river.