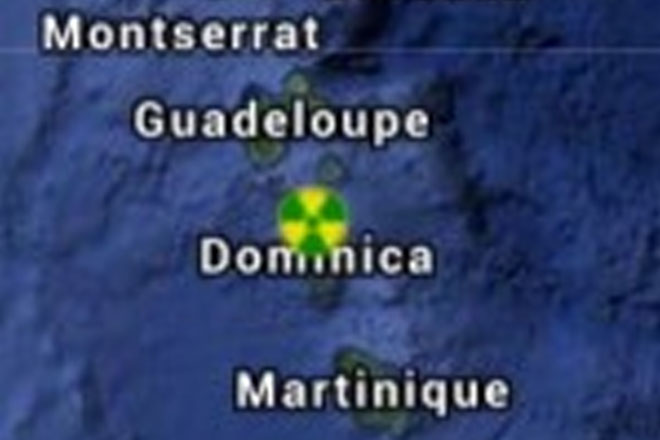 Roseau, Dominica — A new nuclear radiation monitoring station started operation in Dominica. The public can view and follow most recently updated data from Dominica at the Nuclear Emergency Tracking Center (NETC) at www.netc.com, which shows a map of stations updated in real time.

At present, it appears the Dominica station may be the only operating site in the Caribbean, although intermittent readings from San Juan, Puerto Rico, have been observed.

The NETC station in Dominica is maintained as a public service by Dr James Keene, residing for some 22 years in Glanvillia near Portsmouth.

“At the NETC web site, if you grab the map with your mouse, you can move it to display the Dominica site,” Keene explained. “Then click on the icon over Dominica to see most recent data available.”

Radiation monitoring may be of interest from many points of view. For example, arrival of measurable radiation from the Fukushima disaster might be identified. This historic pulse and continuing release of nuclear radiation may arrive in the Dominica area by travel of deadly particles in ocean currents or in rainfall.

“A significant increase in the observed counts per minute suggest something requires attention related to public health,” Keene said.

Also, other sources of potentially deadly radiation might be detected such as illegal dumping of nuclear waste in the sea near Dominica, toxic radiation in imported items including food, as well as seafood caught in Dominican waters. Portable radiation detectors can be used to test individual food or other imported items.