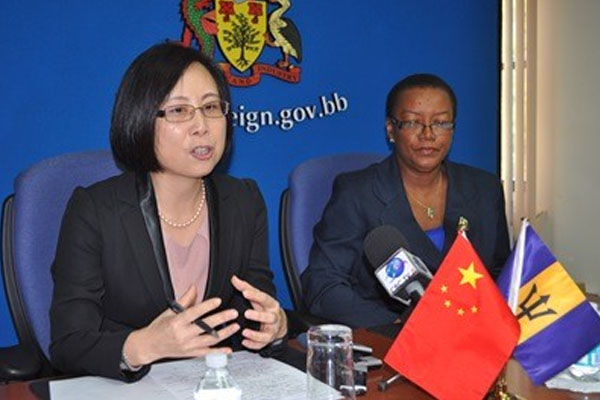 Bridgetown, Barbados (BGIS) — “A new platform between China and CELAC countries, a platform of cooperation; a platform of collective dialogue on the basis of equality, mutual benefit, win-win results and a common development,” is how China’s ambassador to Barbados, Wang Ke, summed up the historic first ministerial meeting of the Community of Latin American and Caribbean States (CELAC)-China Forum, held in Beijing from January 7 to 9.

Noting that the outcome of the conference was reflected in three key documents, she said the Beijing Declaration provided the political consensus and the guiding light to the construction and development of the forum and the Plan of Action 2015-2019, which identified 13 areas of cooperation.

Wang stressed that over the next five years, the bilateral relationship would see China providing US$20 billion for a special infrastructural/construction loan; US$10 billion of preferential loans and US$5 billion of China-CELAC cooperation funds, as well as 6,000 government scholarships, and 6,000 trainee positions, to CELAC countries.

“I think that these kinds of resources could provide a new kind of opportunity for China-CELAC countries to work towards a common goal to achieve win-win results and to achieve common developments,” the Chinese Ambassador said. Stressing that China had maintained long-standing relations with these countries, she explained that several years ago, her country had made a proposal of providing US$1.5 billion of preferential loans to the Caribbean.

The ambassador further pointed out that, in 2013, following a visit to Trinidad and Tobago and a meeting with leaders of the region; China’s President Xi Jinping had announced US$3 billion for this region, with half expected to go towards preferential loans and the other half constituting infrastructural loans.

Wang also disclosed that there were a number of projects in the pipeline in the region to be financed by China, including the Sam Lord’s Castle project in Barbados.

Barbados’ minister of foreign affairs and foreign trade, Senator Maxine McClean, signalled her appreciation for “the hand of friendship and cooperation” that has been extended over the last 37 years of our diplomatic relations.

She told the Chinese ambassador: “This event [CELAC-China Forum] was but one other concrete example of the relationship. The People’s Republic of China has proven to be a reliable partner for Barbados since the establishment of relations and together we have built a solid relationship based on respect and cooperation.

“Tangible expressions of the bilateral relationship have continued through technical and financial initiatives, and people-to-people exchanges in the areas of education, culture and trade. In addition, over the years, China has assisted in the funding of numerous development projects in Barbados, including the construction and refurbishment of some of this country’s most visible landmarks.”