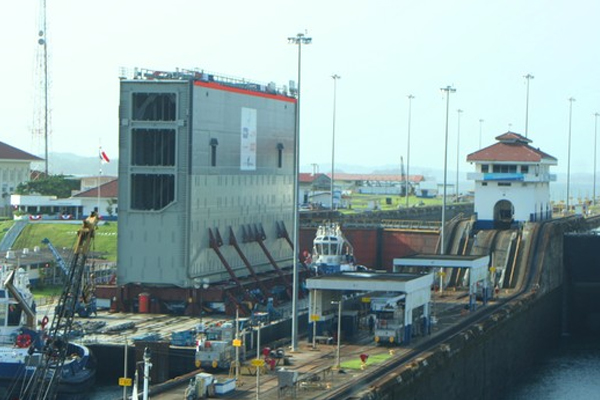 Colon, Panama — Passengers travelling aboard the Coral Princess on Tuesday were treated to a memorable sight for the Panama Canal’s 100th anniversary. They witnessed one of the huge new rolling gates, stacked on a barge, making its way through Gatun Locks.

At a cost of $3.2 billion, the new locks – which act like water elevators for ships – are the centerpiece of the canal’s major expansion. These massive gates, ready to be installed in the new locks, are being delivered four at a time from Trieste, Italy.

Three sets have arrived, the most recent delivered September 8. Only one shipment is left to receive all 16 gates required for the third set of locks project. Passengers aboard the cruise ship traveled parallel to the transport barge, which carried the 4,100-ton gate. Both the ship and barge were raised 85 feet above sea level as they transited into Gatun Lake.

“Our passengers saw history in the making,” said Staff Captain Kevin Grant. “It must have been similar to the moment when the original locks gates were being installed a more than a hundred years ago.”

Construction is focused on both the Atlantic and Pacific sides. A third lane of traffic is being created to accommodate the new breed of post-Panamax vessels. Scheduled to open fourth quarter 2015, the new locks will be 160 feet wide and 1,200 feet long.

Some 250 tour passengers from the cruise ship had another surprise – an up-close look at the new gate, while traveling on an excursion boat into a Pacific lock chamber along with the barge.

“I must have snapped 50 pictures of it – a one of a kind event,” said one unidentified guest.

Expansion plans also include raising the level of Gatun Lake, widening access channels and deepening the canal itself at a section known as “Culebra Cut,” the13-kilometer artificial valley cut through the continental divide.

The final set of rolling gates are scheduled in Panama, January 2015, as agreed by the Panama Canal Authority and contractor Grupos Unidos por el Canal, SA. Total price for the expansion project is now more than $5.3 billion.