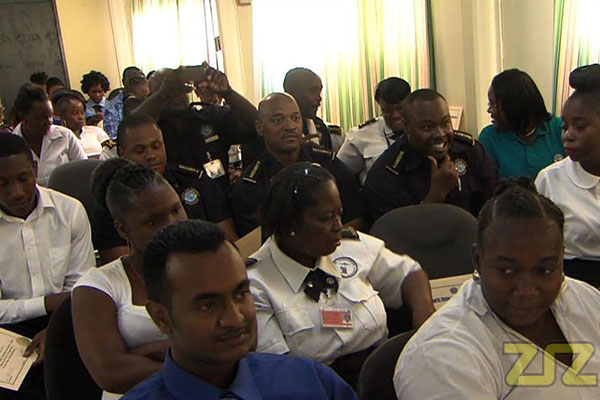 ZIZ News — The police force is enhancing the level of security, particularly around tourist hotspots, by launching a group of Tourist Security Officers.

The officers came out of a recent Island Constable Training Course.

Commissioner of Police, Celvin Walwyn, explained the role of a tourist security officer.

The majority of the new officers are from the People Employment Programme and Commissioner Walwyn says he was happy to get them onboard.

“I think that PEP is one of the blessings of this federation.  We were able to procure young men and women who had zeal and a desire to work.  We got the best and the brightest from this group.  We have very eloquent people who can fulfill this position of tourist security officer,” he said.

Director of the People Employment Programme, Geoffrey Hanley said when the commissioner approached him about the Tourist Security Officer Project he was happy to get PEP involved.

“I told him we’d do whatever we had to do to ensure that it happened.  And we are indeed happy, and I’m particularly proud to know that this is another milestone, another accomplishment of that program where we are investing in our young people,” he said.

Over a dozen persons have been enlisted into the Tourism Security Officer Programme.  Commissioner Walwyn says more training is being planned to prepare them for their duties.