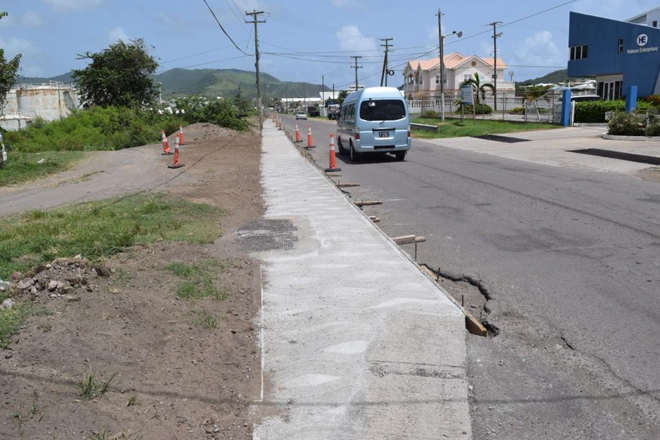 (SKNIS): Pedestrians in the Bird Rock area will travel more safely and comfortably with the addition of a new walkway currently under construction.

Nine hundred and sixty-two feet of the sidewalk stretching from the Food Court to the St. Christopher Air and Sea Ports Authority is being laid as part of Phase 1 of the project. Phase 2 will see the expansion of the project to cover the area up to the round-a-bout in Bird Rock.

“The pedestrians … actually walk in the road. That’s dangerous, so we thought we would fix that once and for all,” said Minister of Public Infrastructure, Ian Patches Liburd. He added that residents will benefit as well as visitors who walk the route at times when the cruise vessel docks at the Deep Water Port instead of Port Zante.

However, the design incorporates more than the walking public. “You should have not only pedestrian access but bicycle access as well,” the minister stated. He said he will continue to work to transform the landscape in St. Kitts so that it becomes a modern country.

A number of residents praised Minister Liburd for his commitment to enhance the infrastructure around St. Kitts, and in Constituency #1 in particular.