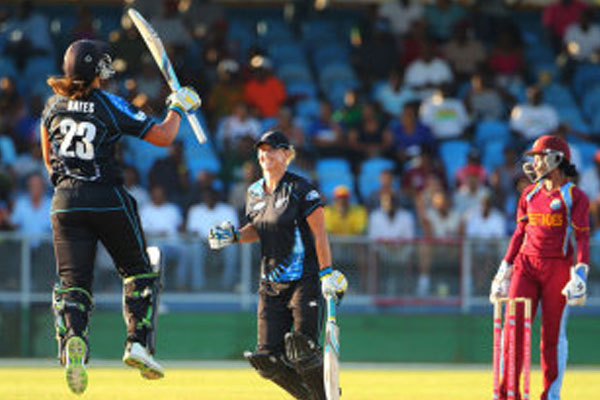 Sports Page — Suzie Bates and Sophie Devine held their nerve in a Super Over, as New Zealand Women successfully collected the six runs they needed to secure the win, and with it, the three-match T20I series against West Indies Women in St Vincent.

Set 112 for victory, West Indies were pegged back by regular blows from the pacers Amy Satterthwaite (4 for 24) and Hayley Jensen (3 for 16) who wrecked the team’s top- and middle-order. The hosts were floundering at 75 for 6 with 37 still needed off the last four overs, but Deandra Dottin counterattacked with a 46-ball 54 that included three fours and three sixes. Dottin’s knock took the hosts to within four runs of victory, but she was caught at extra cover with two balls left. West Indies needed three off the final delivery for the win, but Anisa Mohammed could only scoop over extra cover for two, sending the match into a Super Over.

Dottin was once again sent in for West Indies, but she was stumped off Morna Nielsen from the first ball, immediately putting the team on the back foot. Nielsen followed up with dot balls in the next two deliveries, as Hayley Matthews and Shemaine Campbelle could manage only five runs in the over.

With little to defend, Shanel Daley began well with a dot ball, but bowled a no-ball on the second delivery. Bates and Devine pushed the next two balls for singles, before Bates sealed the series by carting over extra cover for four.

New Zealand, opting to bat, had made 111 for 4 from their 20 overs. Their innings was built around a 43-run partnership between Rachel Priest (29) and Devine (30), and an unbeaten 20-ball 31 from Katie Perkins which gave the visitors a late surge.