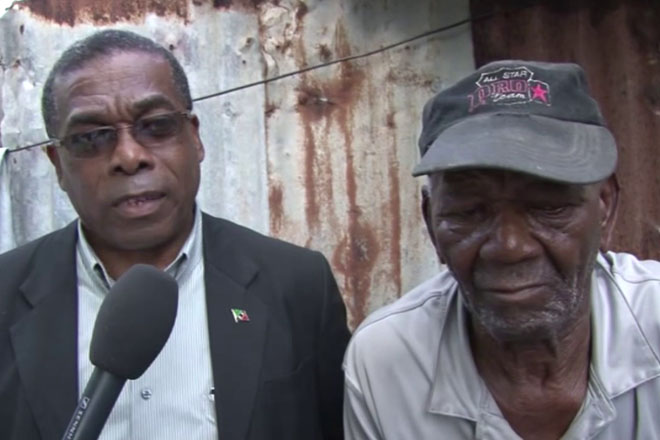 Newtown Senior Citizen Gets Running Water For The First Time

(ZIZ News) — An 84-year-old resident of Newtown is smiling after Area Representative, Hon. Ian “Patches” Liburd, provided him with running water at his home, something he had been living without his entire life.

On Wednesday morning, Minister Liburd visited the home of Norman James where he observed James’ reaction as he turned on the recently installed standpipe for the first time.

Minister Liburd said the initiative falls in line with his plans for the Ian “Patches” Liburd Social Assistance and Youth Development Fund.

“Walking through the alleys here, as a man born in Newtown, I was saddened. I was really saddened to see the absolute poverty to this area. This house is the same way from I knew it since I’m a small boy and to see people living in these conditions. He had no water and you heard him say he catch water from the roof when the rain falls and I said no, we have to help Norman and there are many more Normans in the community we are going to help,” he said.

Minister Liburd is adamant that every house in St. Kitts should have running water.

“My commitment to Norman was to get running water, electricity and improve his standard of living. This is just a standpipe and Norman has to shower as well so the next step is to give him his water so he can have a nice shower, have it running over your head. Norman, so this is a commitment that I have made and I am happy to fulfill it this time. We had some difficulties trying to get it implemented in short order but the fact is, it has been done,” he said.

In response to Minister Liburd’s decision to install running water at his Newtown home, Norman James expressed gratitude to his parliamentary representative.

“Well I’ve got to give many many, many thanks, millions of thanks to you Mr. Liburd for all this kindness you have done for me because I never got this kindness from any one of the different ministers yet. Well even Mr. Powell, is me use to back them [but] I never got this privilege, never had these privileges so I’m giving Mr. Liburd all the thanks that God ever give,” James said.

Meantime, Minister Liburd used the opportunity to expound on his Social Assistance Fund, which is expected to improve the lives of his constituents.

“I have committed to half of my salary as the representative of East Basseterre and that has now been put into place. I have given half of my salary every month to the Ian “Patches” Liburd Social Assistance and Youth Development Fund and this part of it, one step going forward,” he explained.

During the 2015 election campaign, Liburd pledged to donate a portion of his salary to helping residents of East Basseterre.