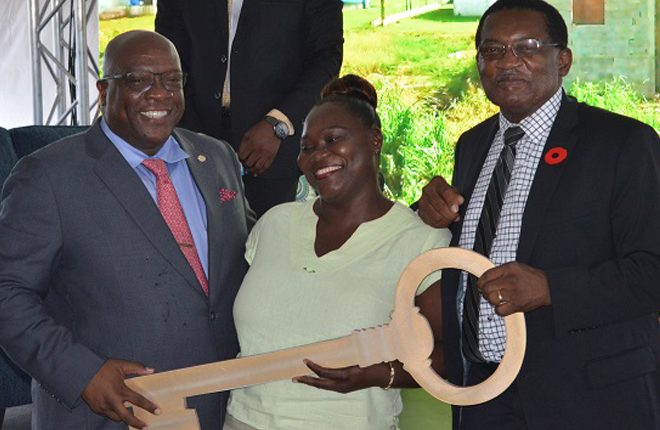 (SKNIS): The Government of St. Kitts and Nevis in collaboration with the National Housing Corporation (NHC) held its fourth housing handing over ceremony for the year on November 07 in Cayon, where the first 14 completed houses under the Unity Housing Solutions Programme were given to persons in the community. Roughly 300 homes are being built in St. Kitts under the programme.

The Honourable Eugene Hamilton, Minister of Human Settlement et al., says the Government’s vision is to provide “bigger, better and more affordable” homes to persons in the federation.

“The Team Unity Housing Solutions Programme is far more than a home, than a building, than a construction project,” voiced the Minister at the ceremony, while stating his pleasure at being able to witness the vision of the project come to life at this “exciting and momentous occasion.”

Minister Hamilton stated that his ministry continues to explore ways to improve housing facilities in the federation and that the project thus far is doing considerably well with the support of the National Housing Corporation (NHC).

“I would be hasten to say that the Unity Housing Solution is by far our best product,” stated Mrs. Elreter Simpson-Browne, General Manager at NHC, while noting that the vision of the Minister of Human Settlement extends far beyond just the construction of the houses, which began in April 2017.

Mrs. Simpson Browne explained that the project has two components: one set of houses is built on land owned by NHC and another set is built on private land through NHC’s building assistance programme.

“As we hand over keys today to 14 families, we would like to think that we put a smile on their faces,” said Minister Hamilton.

He commended the staff at NHC for consistently raising standards and also thanked the local labourers for their hard work done on the houses. Minister Hamilton referred to the houses as “sustainable, sturdy and stronger than before” and noted that they can survive in challenging weather conditions.

The Minister noted that the houses under this programme were designed to create a more comfortable setting by providing homeowners with bigger spaces and a more sturdy foundation. He said, for example, that the houses are now 862 square feet as opposed to the 780 square feet that previously existed.

“Our commitment is unwavering when it comes to the welfare of the people of St. Kitts and Nevis. We endeavour to pursue elevated solutions that positively impact the overall quality of life for our people. In these homes will be your family, financial investments, and please make room for God,” he stated.